Having tried everything else, Willie Benitez achieved his drug-free life with a unique approach - raising abilities 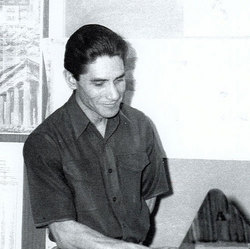 Addiction wasn't called a disease yet in 1966. That was "discovered" many years later. But already in the 60s and 70s doctors were throwing every medication they could think of at drug addicts to "treat" them.

As Benitez said in a recently discovered lecture he gave in 1968, "After 19 years of trying, probed and picked at by psychiatrists and psychologists, everybody was evaluating for me, telling me what my problems were…I noticed that all of us (addicts) in prison were in the same boat. We didn't know what the problem was."

But after reading a few philosophical texts by L. Ron Hubbard, which he had found in the prison library, Benitez realized that he had found a radically different approach. Learning how to think for yourself, how to solve problems for yourself. How? By concentrating on your abilities, Hubbard said, instead of your disabilities. Become more able. Sounds simple, but not so if you are an addict stuck in prison, whether mental or physical.

"I thought back over the years of all the junkies I had shot up with," Bill later wrote, "and remembered their most treasured conversation, 'One of these days I'm going to quit.' I had found the means and was going to share it with them. That's when I made the decision real by writing it down on my calendar page in my cell."

"So effective was the technology I had learned," he continues, "that I experienced a freedom long lost to me. The tall prison walls became only temporary barriers. I realized that my 6x8 foot cell was all that I needed as a command post. Even back then, I knew the Narconon program would reach international proportions."

It certainly has. After the first residential rehab center in Los Angeles, the next opened in Stockholm, Sweden. Sweden has been delivering Narconon drug rehabilitation ever since. The full network now spans over 150 programs in 50 countries, from Kathmadu, Nepal to Hastings, England.

Even better news is the stable success rate. An Arizona State Prison staff report, signed August 13, 1972, stated that 75% of the Arizona Narconon program students were drug-free one year after release. Recent Narconon routine outcome monitoring for rehabilitation programs in California and Oklahoma report the same results.

A case study on the Narconon juvenile program, presented to the Western Attorneys General Conference in 2005, found nearly the same -- 63.5% of the youth lived totally crime free for 2 years following the program (compared to 30.1% of a comparison group).

Narconon graduates are famously proud of Benitez because he was "one of them." And then some. He had the courage to disbelieve the falsehood that one cannot escape the trap of heroin or other drugs. "I started to look. I started to handle. The other men discovered the same thing. They started to become sane and able to resolve their problems."

You may listen to Benitez's rediscovered lecture about drug education and rehabilitation at http://www.narconon.org/.