Former UEFA Cup winner and Dutch National player to visit club in The Woodlands and Conroe. 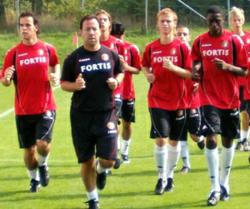 This is a great opportunity for children of all ages to tryout, learn more about the Dutch style of play, and meet the legendary soccer player and current coach Jean Paul van Gastel who really represents what the Dutch school of soccer is all about.

Jean Paul van Gastel, former winner of the UEFA Cup and member of the Dutch National Team is attending tryouts for the Dutch Lions FC in Conroe and The Woodlands, June 6-10.

In addition to running several parts of the tryout process, Van Gastel will offer his opinions on player’s development and share insights from his training and experience as a top world player.

Van Gastel has played for premier soccer leagues such as: Willem II, De Graafschap, and Feyenoord in the Netherlands, as well as Ternana and Como in Italy. With Feyenoord he won the Dutch Championship, the Dutch Super Cup, and the UEFA CUP. While playing for the Dutch National Team, Van Gastel scored a clinching goal against Brazil in a 2-2 tie. Van Gastel has had the distinction of playing among some of the best soccer players in the world. He currently coaches and is responsible for the Feyenoord youth teams under 20—champions three years in a row—producing 21 players for Eredivisie clubs in the last two seasons. Recently, van Gastel received his FIFA A-Pro Coaching License.

Dutch Lions FC President Mike Mossel will also be in attendance at the tryouts. “This is a great opportunity for children of all ages to tryout, learn more about the Dutch style of play, and meet the legendary soccer player and current coach Jean Paul van Gastel who really represents what the Dutch school of soccer is all about.”

About Dutch Lions FC Dutch Lions FC is the premier Dutch-American youth and professional soccer club. With soccer schools in Dayton, Ohio and Houston, partnerships with the Dutch Eredivisie club FC Twente and the English premier league club Manchester United, and professional teams in Texas, Ohio, and Europe, Dutch Lions provides many benefits for their players. The club utilizes licensed coaches, professionals, and former players who teach members the technical skills and tactical development from an early age, the cornerstone of the Dutch approach to soccer. Dutch Lion club members receive excellent training and preparation for advancing to the highest skill levels within the world of soccer. They also benefit from the rich experience of learning from professional players.