St. Sava Serbian Orthodox Cathedral organized a "Feast of Love" benefit celebration honoring renowned philanthropist Lillian Booth for her continued support of the Serbian-American community. The sold out event was held Saturday February 10, 2007 at the Republican Club in New York City. The event highlighted the loving and giving spirit of Lillian Booth and her $100,000 donation for the renovations of the St. Sava Serbian Orthodox Cathedral. Her lifelong love and partner, entertainer Misha Dabich, was the featured performer of the evening. The event was attended by prominent dignitaries, clergy and honored guests, including His Grace Bishop Dr. Mitrophan of Eastern America, and the Reverend Father Djokan Majstorovic, the rector of St. Sava Cathedral. 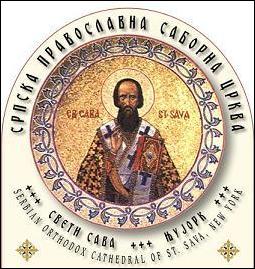 This event is a tribute to love in many possible ways, personally motivated by my sincere loving friends, their fairy tale story of their mutual love for each other over the past 50 years and their 'loving' generosity toward the community and society in general.

St. Sava Serbian Orthodox Cathedral hosted a sold out benefit gala event, a "Feast of Love" celebration, Saturday evening, February 10, 2007 at the Women's Republican Club in New York City. In the spirit of love and appreciation, the event was organized to honor renowned humanitarian Lillian Booth's recent $100,000 donation to the St. Sava Serbian Orthodox Cathedral (http://www.stsavanyc.org) Restoration Building Fund. Her lifelong partner, singer Misha Dabich, was the featured guest entertainer of the evening. The event was attended by prominent dignitaries, clergy and honored guests, including His Grace Bishop Dr. Mitrophan of Eastern America, and the Reverend Father Djokan Majstorovic, the rector of St. Sava Cathedral.

As a generous philanthropist, Lillian Booth is a patron of many causes and has helped improve the lives of millions of people in various fields of interest. She has donated in the areas of education, arts, culture, civic affairs, senior citizens welfare, medical care and children's causes.

Ms. Booth has made numerous contributions over the years, including generous donations to St. Sava in the last five years, placing her as the Cathedral's largest contributor. Other recipients of her generosity have been the Actors' Fund of America which received recently $2 million dollars and renamed their Actors' Home in Englewood, NJ as the Lillian Booth Actors' Home. In addition, Ms. Booth donated $3.5 million to the Pascack Valley Hospital in Westwood, NJ, which helped establish both the Lillian Booth Dialysis Center and Lillian Booth Radiation Oncology Pavilion.

Ms. Booth's lifelong partner of 50 years, award winning international skating artist, performer, musician, entertainer and comedian, Misha Dabich is of Serbian descent and is a generous supporter of preserving Serbian heritage. Born in Lebanon, Pennsylvania of Serbian immigrant parents, he grew up in the Serbian community and has been actively involved with St. Sava Cathedral, in New York since 1947.

The entire Serbian community celebrated with Misha Dabich in his expression of his lifelong romance and love for Ms. Booth as he performed "Songs of Love," singing American love classics in the Frank Sinatra style. His performance versatility amazed the primarily Serbian audience.

"Misha's performance touched us all. Not only did he perform love songs of the American classics -- but he pleasantly surprised us when he started speaking and singing in fluent Serbian, and then he sang our Serbian classic song "Tamo Daleko" in the finale, which got a standing ovation from Serbian community," said the Very Reverend Father Majstorovic.

The overwhelming enthusiastic applause moved Mr. Dabich. "I was a bit concerned since the audience was mostly ethnic Serbs, and I am American born, singing American love classics. The outcome for me was very surprising. The audience responded and that helped me to be more confident and then when I felt an overwhelming reaction I was even more at ease with myself and more dynamic on stage."

The event was organized by Mira Zivkovich, CEO and president of MZI Global Marketing (http://www.mziglobal.com) in New York City who also promoted the event.

"For me, giving love is the first step toward happiness" says Ms. Zivkovich. "This event is a tribute to love in many possible ways, personally motivated by my sincere loving friends, their fairy tale story of their mutual love for each other over the past 50 years and their 'loving' generosity toward the community and society in general."

Ms. Zivkovich's lifelong passion for the diversity of cultures and people developed into an "ethnosynergism" marketing methodology that is based on the very idea of "giving love," whether it is to an individual, community or society. Recently, she was instrumental in establishing the Slavic Heritage Coalition (http://www.slavicheritagecoalition.com) which promotes the interests of Slavic- Americans in American life and culture.

"Misha's performance not only touched our guests, both American and ethnic Serbians, with his charismatic stage presence and warm personality, expressed through his voice and humor, but also captivated the audience. His Serbian dance shocked us, since it requires much vigor and would be challenging for anyone at any age" says Mira Luna, the Cathedral's First Vice President.

"Misha is great performer. What is surprising is that his singing of American Classic songs, thrilled not only his own generation but also us, a younger audience. And even more surprising is that over 50% of the guests were under age 40" says Nenad Milinkovich, President of Executive Board of St.Sava.

"Misha's performance was very moving in that a Serbian-American would be so connected to his Serbian heritage. Above all, such a generous donation from Lillian to our cathedral touched my heart" says Radmila Milentijevich, one of the top donors to the Serbian Orthodox Cathedral, Serbian cultural institutions and Serbian heritage programs.

"Fantastic! This evening was full of love in every way, toward our Serbian Christian Orthodox faith, Serbian heritage and people. Superb performance" says Mirjana Stepich, who with her husband Boris contributed a great deal to the success of the event, as well as years of support, not only in their financial generosity but also in their continued active, hands-on support in helping St. Sava Cathedral in New York.

The evening was filled with joyous music and dancing. Photo: Vladimir Solic)

Lillian Booth (center) is showered with kisses, love and support from her friends(Photo: MZI Global)

Mira Zivkovich (left) thrilled in response to a donation from Michael Masanovich (right), already a major contributor to the Cathedral. (Photo: MZI Global)

Entertainer Misha Dabich has had a long and exciting career.