Some businesses seem to be recession proof. The footwear industry has one of the fastest growing sub-industries in the economy: comfort shoes. The latest aspiring footwear star is the Gravity Defyer Footwear Company. 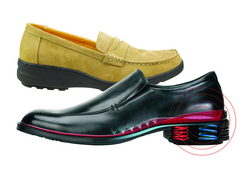 In a slumping economy, there appears to be one emerging sub-industry of the footwear industry that is recession proof: comfort shoes. The comfort shoe industry has seen an increase in demand for its footwear, which has become more fashionable and high-tech, as the aging baby boomers are willing to spend larger sums of their money for more comfortable shoes.

Perhaps the greatest innovation by this upstart comfort shoe company is its marketing effort. While most shoe companies build their business by placing their shoes in major retail outlets, Gravity Defyer Footwear is pursuing direct retail sales in addition to retail outlet placement. Its advertisements are a far cry from traditional shoe ads as well. Gravity Defyer advertisements often feature a wide-eyed, excited businessman flying over a cityscape in his Gravity Defyers. It even admits to purposely misspelling defier so that it knows how effective marketing efforts are for the shoes.

The company has also started to further distinguish itself to the online market with creative multimedia. Just days after the Kobe Bryant video showing him jumping over a speeding Aston Martin, Gravity Defyer released a video on the Internet featuring the antithesis of Kobe: Bruce Vilanch. Yes, the same Bruce Vilanch who writes the Academy Award® shows. The same Bruce Vilanch who outweighs Kobe by triple digits and is the last person you would ever expect to see jump over a car. The company had so much success with this spoof video of Kobe jumping over a car that their servers crashed for a couple of hours after they released the video.

Yet, funny videos are not the only media that is succeeding for this upstart comfort shoe business. Its sales have steadily increased during its first year of business, and it has even seen continued strong growth during the very sluggish first quarter of 2008. In fact, it reported sales 41% higher for the first quarter of 2008 than the first quarter of 2007. Business has been so good for Gravity Defyer that the company plans to roll out dozens of new styles, including more fashionable women's footwear.

With the aging population and need for comfort, expect to see more of the upstart Gravity Defyer Footwear Company.