Award-winning Boston jazz/Latin band with a decade of experience in Ethiopian music is invited to play a series of concerts in Ethiopia, in May 2011, celebrating the work of Nerses Nalbandian, an Armenian musician who found a home as Ethiopia's maestro from the 1930s to the 1970s. Band launches Kickstarter.com campaign to raise $10,000 in 30 days to partially fund the tour; simultanously prepares for concerts in Massachusetts with legendary Ethiopian singer Mahmoud Ahmed 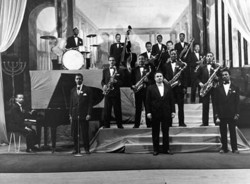 Sends the senses into the very heart and soul of communal human love...A force that dares to break barriers.

The Either/Orchestra (E/O), a Boston-based ten-piece ensemble which is recognized as one of the world's leading big bands and also as perhaps the top foreign interpreter of Ethiopian music, has launched a Kickstarter.com campaign to raise $10,000 by March 24. The funds will be used to help support the group's second visit to Ethiopia, slated for May 2011. Other funding is anticipated from US, French and Turkish Embassies in Addis Ababa, along with other sources.

The group, which recently celebrated its 25th Anniversary, is invited by the Alliance Ethio-Francaise to return to Addis Ababa to play tribute concerts for Nerses Nalbandian, an Armenian expatriate who was the top maestro of Ethiopia from the 1930s through the 1970s. This brief tour is the second collaboration between the Addis Ababa branch of the French cultural organization and the Either/Orchestra. In 2004, the Alliance featured the E/O in the Ethiopian Music Festival, making it the first US big-band in Ethiopia since Duke Ellington, in 1973, and the first American artists featured in a fundamentally Ethiopian festival.

Seventy years before the E/O – whose members had come from the US, the Dominican Republic and Suriname – arrived in Ethiopia, Mr. Nalbandian was hired by the Emperor Haile Selassie to bring Western music skills and sounds to the capital city, Addis Ababa. Mr. Nalbandian was ultimately appointed the first music director of the Haile Selassie (National) Theater in 1956. Having trained hundreds of musicians and arranged or composed hundreds of Ethiopian and original pieces and having led the flagship band of the country, he cast a long shadow over the development of modern Ethiopian music.

Mr. Nalbandian's children, then in their 60s, heard the Either/Orchestra during the 2004 visit and immediately realized that this group, under the leadership of its founder Russ Gershon, was the ideal band to revive the music of their late father. Daughter Mary and her siblings invited the band to their home for a sumptuous Ethio-Armenian feast during the visit, and after dinner began pulling out boxes of their father's old scores. By the end of the festivities, Mr. Gershon had been convinced that the E/O should play one of Maestro Nalbandian's arrangements in their Festival concert. A few days later, they performed a song called "Eyeye" in the ballroom of the Hilton Hotel, the first time this arrangement had been played in a half century.

That performance, along with the rest of the concert, was later released in Ethiopiques 20: The Either/Orchestra Live in Addis, a double CD set which received rave reviews: "Astonishing... monumental... the best live album of the year—in any genre" (Paul Olson, AllAboutJazz.com); "...a total triumph as music, once again, brings together diverse peoples in mutual love." (Budd Kopman, AllAboutJazz.com); "Sends the senses into the very heart and soul of communal human love...A force that dares to break barriers." (Lofton A. Emenari III, WHPK, Chicago).

The planned visit brings things full circle, as a group of foreign artists who have found a second home in the world of Ethiopian music pay tribute to a foreigner of an earlier generation, an expatriate who made his permanent musical home in this fascinating and rich culture in the Horn of Africa.

March Concerts in Massachusetts: Mahmoud Ahmed and the Either/Orchestra

Coincidentally, at the same time the Kickstarter campaign and other preparations for the trip are in high gear, the E/O is rehearsing for two concerts with Mahmoud Ahmed, Ethiopia's most beloved singer. The E/O and Mr. Ahmed have been collaborating for five years, but this is the first time they will perform together in the band's home state of Massachusetts. March 24 finds them at the Regattabar in Cambridge, and March 25 they head west to Amherst College. After large-venue appearances in London, Paris, the Glastonbury Festival, Milan and New York's Lincoln Center, the Regattabar peformance in particular will present this dynamic combination in an unusually intimate setting.

Mahmoud Ahmed is one of the world's great voices and the closest thing Ethiopia has to an international superstar. He has won BBC awards and appeared on festival stages all over Europe, but in the US he tends to perform at events within the Ethiopian community, with little mainstream exposure. Born in 1941, he was working as a handyman at the Arizona Club in Addis Ababa in 1962, when one night the lead singer failed to appear. Mr. Ahmed volunteered to sing that night with the Imperial Bodyguard Band, a military band that was moonlighting as a nightclub orchestra. Impressed, the band's arrangers eventually worked him into the act, a tenure that lasted until 1974. In the mid-70s Mr. Ahmed made a number of recordings as a leader which are at the pinnacle of modern Ethiopian music, including the songs that have been collected as the album "Ere Mela Mela."

Since that time, throughout the totalitarian Derg regime (1974-1990) and today's more democratic government, Mr. Ahmed remains the most popular Ethiopian singer of his generation. In 2005, he and the E/O performed together for the first time at the important Banlieues Blues Festival in Paris, an encounter which was documented in the documentary "Ethiogroove." This was Mr. Ahmed's first work with an foreign band and his first time with a big band since the 60's, but the creative success has led all parties to continue the collaboration.