EKTIMIS launches a landmark website that commemorates the 10th Year Anniversary of the events of September 11. The commemoration serves as a tribute to the lives lost at the World Trade Center, the Pentagon and in Shanksville, Pennsylvania. The national initiative provides a platform for some creative and innovative programs that engage America’s youth on the topic of 9/11, honors the U.S. military and firefighters, and acknowledges military families. 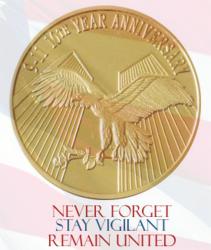 This commemoration initiative is also a call to action for all Americans -- Never Forget, Stay Vigilant, Remain United.

EKTIMIS announces the launch of a landmark 9/11 10th Year Anniversary website and initiative. The website, designed with patriotic themes and national colors, commemorates the 10th year anniversary of the events of September 11 in a creative and innovative manner. The site features three noteworthy programs designed to engage America’s youth, the business community, and America’s Moms.

With mainstream focus gradually returning to the 2012 presidential election campaign, after a heated and drawn out debt ceiling debate in Congress, the countdown to the 10th year anniversary of September 11 continues quietly primarily at Ground Zero in New York City. A spokesperson for EKTIMIS says, “EKTIMIS has planned this 9/11 commemoration initiative for the past 18 months to unite and inspire the country by focusing on what brought us together as a country during a time of immense tragedy.”

The ten year anniversary website features a National 9/11 Student Challenge, a program sponsored by EKTIMIS that engages America’s youth in a national competition where they share their thoughts on select September 11 topics through the use of video. Teams of students in three educational categories, limited to one team per school, can enroll starting later this month (August), with the competition scheduled to commence soon after September 11.

In addition to America’s youth, the EKTIMIS 9/11 commemoration reaches out to the business community and to America’s Moms. The initiative features a Support A Hero program that enables a business to express gratitude to America’s brave men and women in uniform, as well as firefighters, by giving them an appreciation gift – a specially commissioned collector’s anniversary artwork - that honors the military as well as the lives lost during the World Trade Center attacks.

Similarly, the initiative features an innovative Connect With A Family program that enables America’s Moms to express gratitude and words of encouragement to military Moms, by giving them a gift as well – a specially commissioned 9/11 10th anniversary framed medallion - that contains the caption, Never Forget, Stay Vigilant, Remain United.

The EKTIMIS 9-11 10th Year Initiative is the creation of Niyi Taiwo, founder of EKTIMIS and author of the EKTIMIS Top Ten Laws of Respect literary principles and the Top Ten Laws of Respect book series. He is quoted as saying that “This commemoration initiative is also a call to action for all Americans -- Never Forget, Stay Vigilant, Remain United.”

About EKTIMIS:
EKTIMIS is an innovative human capital development solutions provider. EKTIMIS develops its own brand of original products and services that include respect-themed books, articles, multimedia videos, workplace and organizational culture training seminars (featuring the hallmark EKTIMIS Respect in the Workplace Program), and powerful inspirational picture-framed artifacts for individuals, working professionals, parents and families, and organizations. EKTIMIS also offers a Custom Artifact Program that provides an innovative platform for fund raising and for commemorative events by private and public organizations. EKTIMIS and EKTIMIS.com are a licensed brand and an operating business division (DBA) of Strategic Enterprise Technology, Inc., a creative Boston-based performance improvement solutions company founded in 1999. Follow EKTIMIS September 11 anniversary news and activities on Twitter and on Facebook