Coalition of Election and Computer Experts Ask Congress to Vote No on H.R. 811 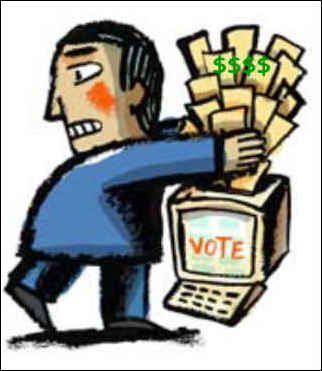 This bill should be called the 'Voter Con Act', it will not really make our elections more secure!

American elections are about to be further compromised by a legislative "solution" to electronic voting machine fraud, according to a coalition of election and computer experts and citizens.

This highly compromising bill is about to come up for a vote in Congress is H.R. 811, "The Voter Confidence and Increased Accessibility Act of 2007".

Vickie Karp, National Chair of the Coalition states, "We at the Coalition for Visible Ballots believe that H.R 811 would actually perpetuate widespread election fraud for a number of reasons, and that the Congressional co-sponsors of this 60-page document, and the public, truly do not understand its dangerous implications for our democratic elections."

According to Abbe Waldman Delozier of the Coalition for Visible Ballots, "This bill should be called the 'Voter Con Act', it will not really make our elections more secure!"

DeLozier, Karp, and the signatories below present the following partial summary of reasons why they oppose this bill:

See: YouTube video explaining crucial aspects of the bill can be seen at this link: http://www.youtube.com/watch?v=LjFHNfKWkCs

Bruce O'Dell, a computer security expert states, "My clients and I would both go to jail if we applied the same standards of security and audits to our banking systems that America has been conned into deploying in its electronic voting systems. The primary 'problem' with the common sense alternative -- a return to citizen-run elections with hand counted paper ballots -- appears to be that doing so would take public money out of the pockets of voting equipment vendors and their academic and political allies."

Jeremiah Akin, a computer programmer who has studied voting machine software used in many elections states, "Not only does the voting program I examined allow one to modify its code, it will clean up the modifications a person made. So the next time someone opens the software, all the code that was modified would be reset back into its original form. This means that election workers, the public or vendors could conceivably tamper with the election results and no one would know it. Contrary to popular belief, election audits do not go through every paper ballot to see if the totals from the machines match up to the paper."

The Coalition is asking all Americans to contact their elected officials in Washington TODAY to tell them to vote NO on H.R. 811. Citizens must reclaim our rights to run our own elections instead of allowing them to be run by corporations who control the voting machines, run on secret software.

For more information and another YouTube video on this topic, go to http://www.coalitionforvisibleballots.org and http://www.hackedelections.com