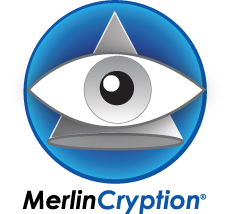 The weakest link in encryption is the potential for an unauthorized user to take control of the key. The new ASBE algorithm’s larger and variable length key is communicated by undetectable means and cannot be predicted.

“The encryption key is the point of vulnerability, making it the target of choice for criminals,” explains Paul “Prem” Sobel, CTO MerlinCryption LLC and ASBE developer, “Successful attacks more often break the key or capture it through its method of communication.”

The ASBE algorithm defeats differential cryptanalysis with a variable key that scales from 251 bytes to 2 gigabytes in length. While its larger and changing key length leverages the difficulty of prediction, its use is not cyclic. Standard differential analysis and any attempt at byte frequency cannot crack it.

ASBE key generation, communication, and storage cannot be detected, as keys are generated-destroyed-recreated, on demand. This eliminates a need to communicate the key, circumventing criminal interception.

The algorithm’s anti-statistical + key dependent block encryption attributes, stem from my research in the foundations of mathematics and from creating encryption algorithms in early career tenures,” says Sobel, “I realized how to modify an algorithm to exponentially strengthen the program against brute force attack.

The extensions were also designed to defeat Differential Cryptanalysis. One of the effects of these extensions is that given identical input (plaintext to encrypt, key, and password) the resulting cyphertext is different every time, even in length.”

The mathematical approach of factoring, ECDLP, or similar analysis cannot be used against the algorithm, as it uses a sequence of non-linear steps, which exhibit no periodic repetition.

In an interview with The M2M Daily News, earlier this week, Sobel discusses the algorithm’s red herrings and noise injection in securing device and machine-to-machine connectivity.

The encryption incorporates a scalable password to 64K bytes and is efficient, fast, and agile. It is BIS/NSA approved for export, and OFAC compliant.

The unprecedented security platform protects integrity of data-at-rest, data-in-motion, data-in-use, and data-in-change as it is created, viewed, edited, shared, stored, and moved across communications channels and through the Cloud. The encryption is HIPAA, HITECH, and FDA compliant.

About Paul “Prem” Sobel
Paul “Prem” Sobel graduated with honors with a B.S.E.E. Electrical Engineering from Pratt Institute, and an M.S.E.E. Electrical Engineering from California Institute of Technology.
As a college intern Sobel identified a recurrent problem in IBM’s testing system that saved the company $1 million per year. NASA recognized him with an individual commendation for his automation of spacecraft programming on planetary probes.

He holds three patents in CPU Architecture and one classified patent.