The NEVIS Engine Company Ltd. announced the closing of its 1st round of seed funding following over 2.5 million Euro of government grants for its recently completed prototype 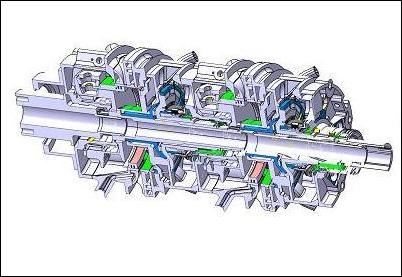 Following the encouragement of Prof. Domenico Laforgia, a leading expert in engine technology, I began pursuing the NEVIS project. Today I am encouraged by the new funding the Company was able to attract and am confident we are now a step closer toward the practical adoption of the NEVIS engine technology.

The NEVIS Engine Company Ltd. today announced that it has successfully closed its first round of seed funding to help the Company further test and develop awareness of its breakthrough patented technology incorporated within its first functioning prototype. The NEVIS (New Exhaust Valve & Intake System) engine is an innovative Internal-Combustion Engine (ICE) that, within a single patented engine design, is estimated to nearly double the fuel efficiency attained by conventional ICE technologies.

At the heart of the NEVIS technology is both a new combustion cycle (the "Bortone Cycle", named after the engine's inventor, Cesare Bortone) and a breakthrough engine design protected by two patents. These innovations combined allow the engine to achieve near-perfect combustion at all levels of power demands (partial power demands of city driving versus full and constant power demands of highway driving). The engine's versatile design means it can be configured to be fuelled not only by gasoline but also by diesel, hydrogen and bio-fuels.

The Company believes that the NEVIS technology holds enormous potential because, to date, most industry players have focused on adding a second engine (as in today's hybrids with their electric motors) at significant cost to overcome the inefficiencies of conventional internal-combustion engines at varying power demands.

The NEVIS engine, constructed using conventional methods and materials, singularly addresses a variety of strategies for enhancing efficiency: engine weight and size are reduced through its doughnut-shaped piston but power is increased for the same cylinder displacement due in part to an innovative use of the energy of the engine's exhaust vacuum and to the fact that the engine has 6 times the number of power strokes per revolution than a traditional four-stroke engine. Optimum combustion occurs at all power levels thanks to the engine's variable combustion ratio and variable valve timing/duration. If the Company is successful, as it believes it will be, in fully optimising combustion, then the NEVIS engine will have the potential of achieving near- zero emissions while at the same time nearly doubling fuel efficiency.

A functioning prototype of the NEVIS engine was completed and successfully bench tested in Italy during 2006, an operation funded largely by Italian government grants from its Research and University Ministry (MUIR). Following this, Cesare Bortone, the engine's inventor, engaged Strempel & Partners ( a Milan-based Corporate Finance firm) to help the Company identify partners and funding for in order to further develop and commercialise the NEVIS technology. With the seed round of funding completed today, the Company can begin focusing on this next stage and further develop its relationship with major engine manufacturers initiated in late 2006 both in Europe and the United States. The Company is also in the process of selecting a leading research university to assist in providing analysis and testing support for the NEVIS technology.

Cesare Bortone, the engine's inventor and Director of the NEVIS Engine Company Ltd., commented: "Following the encouragement of Prof. Domenico Laforgia, a leading expert in engine technology, I began pursuing the NEVIS project. Today I am encouraged by the new funding the Company was able to attract and am confident we are now a step closer toward the practical adoption of the NEVIS engine technology."

Raffaele Maggio, the Chairman of the NEVIS Engine Company Ltd. and former FIAT executive, stated: "Receiving funding outside established industry players, as we have achieved today with this seed round, is very significant. As I have witnessed in my career, most of the large players prefer incremental improvements and accordingly shy away from breakthrough technology, particularly technology developed externally. They need to be coaxed and with this funding, along with projected follow-on rounds, I am convinced we will be able to gain industry buy-in."

David Strempel, President of Strempel & Partners Srl and a Director of the NEVIS Engine Company Ltd, said: "This project immediately got my attention given the enormous impact it could have on some of today's most important issues: global warming and our dependency on fossil fuels. At first I was sceptical, but after consulting a number of engineering experts and researching other recent engine innovations, I became a true believer. This round of funding shows that while early-stage venture capital is nearly non-existent in Italy, good projects can attract attention even if one has to tap resources outside of Italy."

About the NEVIS Engine Company Ltd.:

NEVIS Engine Company Ltd. is a technology commercialisation company formed after the NEVIS Engine prototype went through its first successful bench test in 2006 (funded largely by Italian government grants). The NEVIS (New Exhaust Valve & Intake System) engine is an innovative internal-combustion engine estimated to be capable of nearly doubling the fuel efficiency attained by conventional engines. Additionally, its modular cylinder construction (e.g. 2, 4, 6 or 8-cylinder engines from a one-cylinder block) offers opportunities to enhance manufacturing efficiency while allowing a single facility to produce a wide range of engine sizes for varying power needs suited for diverse applications (automotive, aeronautic and marine). Its versatile design means it can be configured to be fuelled not only by gasoline, but also by diesel, hydrogen and bio-fuels. The Company is now focused on licensing the patented technology incorporated within the NEVIS Engine and developing further enhancements to the underlying technology. For more information write us at info@nevisengine.com or visit us on the Web at http://www.nevisengine.com.