Mingoville's Flamingo City (http://www.Mingoville.com) opens its doors to children, tweens, and teens in over 190 countries, with free English lessons for kids. Students can learn English the fun way as a second language with Mingoville's completely Web-based application featuring English games for kids. 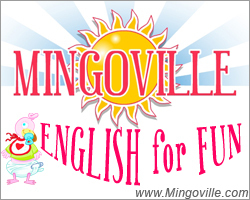 some 14.4 per cent of primary pupils now come from non-English-speaking homes -- a figure that has doubled since 1997.

The ability for kids to learn English as a second language is becoming more important in today's world. Between new technologies leading to more international economic interaction and immigration issues in English-speaking nations, the ESL demand is continually growing. If these trends continue, today's youngest generation will have an even greater need to learn English in coming years (such as to increase their educational or job opportunities). To help today's children better become global citizens of tomorrow, Mingoville (Mingoville.com) is making its online English course for kids completely free.

The current immigration levels in the UK are a prime example of the need for programmes like Mingoville, offering free online English for kids. As reported by Telegraph.co.uk in April, "some 14.4 per cent of primary pupils now come from non-English-speaking homes -- a figure that has doubled since 1997." It was further reported that "in inner London, the proportion is a staggering 53.6 per cent of all pupils." In other areas of the world, such as China, growing economies have contributed to increases in spending by families wanting to educate children in the English language. According to a survey conducted by China Mainland Information Group, the Chinese are spending $770 - 1540 USD per child on English language education in some of China's large cities such as Beijing, Shanghai and Canton.

Mingoville's creators understand that children learn English best when learning is fun. This "edutainment" model allows children to learn English by clicking, doing, exploring, and interacting -- comprehensive virtual language immersion based on advanced technologies and the newest pedagogical knowledge. This immersion allows students to learn through a variety of methods such as direct interaction with the exercises and games, visual learning, and audio elements to help students perfect their English pronunciation.

Kids learn English somewhat differently than many adults expect, which is why there is no instruction in the student's local language when using the Mingoville online learning application. "We have experienced that when we launch this product in developing countries, teachers and parents can be resistant to it," says Mingoville's CEO, Stephan Stephensen. "From a Scandinavian research perspective, however, we have found that children learn a new language best when they have to listen to the language all the time. By not allowing students to constantly look up words, Mingoville enables them to learn English the fun way through a more holistic experience where kids are learning by doing."

While Mingoville's free English lessons for kids are designed primarily for students from ages of 8-12, kids as young as five can successfully complete the English games for children, and even older teens and adults learning English as a second language can benefit from Mingoville's intuitive interface. Students can register for a free account to continue their English language studies online at their own pace from anywhere with an Internet connection, or they can access Mingoville's ten missions and several hundred exercises in spelling, speaking, listening, and reading by logging in as a guest.

About Mingoville.com
Mingoville Aps, launched in 2007, is a Danish developer of language e-learning products for kids. The company's popular English course for kids has helped more than 100,000 students in over 70 countries learn English as a second language. Mingoville's e-learning platform was founded on the principle that learning should be fun, and its development was sponsored by the Danish Ministry of Education's IT-Center for Education and Research, through the organizations focus on IT in elementary schools. Mingoville is planning to release additional online language learning programmes in the future for languages such as Danish, Spanish, French, Arabic and Chinese.

Parent's GuideThis guide describes the content and the structure of the Mingoville Universe. It also explains how kids may use Mingoville.