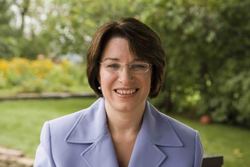 Senator Klobuchar’s service on the Senate Commerce Committee and the Senate Judiciary Committee makes her an ideal addition to the GA Fly-In agenda,” said Julie Coons, president and CEO of ERA.

The Electronic Retailing Association (ERA) announced today that Senator Amy Klobuchar (D-MN) will deliver the keynote address at the upcoming 2010 ERA Government Affairs Fly-In. The address will be given on Wednesday, May 19 at 12:00 p.m. at the Hotel George in Washington, D.C.

A member of the Senate Commerce Committee, Sen. Klobuchar is expected to discuss her views on consumer protection in a wired world as well as net neutrality and privacy.

“Senator Klobuchar’s service on the Senate Commerce Committee and the Senate Judiciary Committee makes her an ideal addition to the GA Fly-In agenda,” said Julie Coons, president and CEO of ERA.

Klobuchar has been a leading advocate for consumer protection both online and offline. She recently introduced legislation reforming the Truth in Lending Act, amending the Consumer Product Safety Act and improving broadband rollout. She also recently appeared on a New York Times short list of the women most likely to become president and was mentioned as a potential Supreme Court nominee during the last two vacancies.

The ERA Government Affairs Fly-In is the annual gathering of elite professionals whom advocate on behalf of the direct response marketing industry on Capitol Hill. This year the participants will argue against a dramatic expansion to the FTC’s rulemaking authority and sweeping changes to advance consent marketing practices.

About the Electronic Retailing Association
Representing a more than $300 billion market, the Electronic Retailing Association (ERA) is the only trade association in the U.S. and internationally that represents leaders of the direct-to-consumer marketplace, which includes members that maximize revenues through electronic retailing on television, online and on radio. ERA strives to protect the regulatory and legislative climate of direct response while ensuring a favorable landscape that enhances e-retailers' ability to bring quality products and services to the consumer. ERA members include some of the industry's most prominent retail merchants, including Allstar Marketing, eBay, Discovery Communications, Gaiam, Google, Guthy-Renker Corporation, HSN, Oaklawn Marketing, QVC, Telebrands, ShopNBC and Thane. For more information about ERA, please visit http://www.retailing.org.