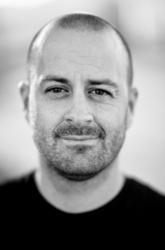 He understands the relationship between digital innovation and traditional fundamentals better than anyone I have met. He also fits into our start-up culture perfectly, which is hugely important to us," said EVB’s President, Daniel Stein.

“We could not be more excited about having Steve join the EVB family as our new creative chief. It took me about 3 seconds after meeting him to recognize that this was the guy to lead EVB’s creative vision,” said EVB’s President, Daniel Stein. “He understands the relationship between digital innovation and traditional fundamentals better than anyone I have met. He also fits into our start-up culture perfectly, which is hugely important to us.”

Babcock was VP/Executive Creative Director at Crispin Porter + Bogusky (CP+B) in Boulder, Colo., where he worked for six years. He worked on accounts including Volkswagen, Geek Squad and Amex OPEN, and managed Domino’s Pizza, Guitar Hero, Best Buy, Applebee’s and others as an executive creative director or CD. Along with achieving a sales spike that will serve as an MBA textbook case study for years, Babcock won several industry awards for his team’s creative campaign that helped Domino's Pizza turn its reputation around, including a 2009 Cannes Integrated Lion for “You Got 30 Minutes,” and a slew of Pencils, Lions and Clios for the “Domino's Pizza Tracker.”
Babcock will open a creative office in Boulder. EVB is based in San Francisco where it has close ties to the Silicon Valley and technology. The agency also has a London office that handles its global social media account for Chivas Regal.

Before joining CP+B in 2007, Babcock was Creative Director at the Salt Lake City agency W Communications, which merged with Struck in his last year there. He spent about four years at the shops combined.

An avid fan of pop culture, Babcock is fascinated by the effect digital advertising—especially social media—can have on life and art. And, as a result, back on the business of advertising. This is why it makes sense that he’d choose as his next career step a shop that has built so many brands by creating not just believers but brand evangelists through social campaigns such as Elf Yourself (Office Max), Serenading Unicorn (Juicy Fruit), Gagaville (Zynga), Paint the Town Black Mamba (Nike) and Mob the Rainbow (Skittles).

“I was really attracted to their innovative spirit," said EVB ECD Steve Babcock. "Not just in terms of creative output, but also in regards to the way they conduct their business. There's something really exciting about an established and successful agency that still has the fire of a start-up.”

In 2006, EVB joined the Omnicom Group, a global leader in advertising, marketing and corporate communications.