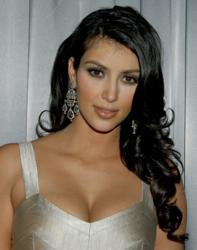 To defend herself, Kardashian tweeted today, "I'm used to rumors & almost never address them. Buuuut…. It's not ok when magazines like InTouch involve my close friends in their made up stories..."

Eduardo and Eva broke up this month after dating and making out all over the world for for the past year (E! News 3/22/12). Not even a month later, In Touch Magazine claims that Kim, a close friend of Langoria, stole Cruz away from her (E! News 3/22/12).

To defend herself, Kardashian tweeted today, "I'm used to rumors & almost never address them. Buuuut…. It's not ok when magazines like InTouch involve my close friends in their made up stories. They were told by multiple people that their current cover isn't true, but they decided to go ahead. & run it anyway. So there you have it."

Explore Talent's proprietary software and vast infrastructure is the most advanced entertainment-based technology of its kind. The site's popularity is based on the fact that there are many ways for talent to network, make friends and connect with other industry players, participate in wide variety of contests and earn prizes for being active on the site. The easy access to a pool of over six and a half million members attracts industry players who are posting every month about 50,000 new auditions and job openings which is 30 times more than any other site.