Fadó Irish Pub and Restaurant located at 273 Buckhead Avenue is once again throwing the biggest St Patrick's Day party in Atlanta. With a week long schedule of events planned, including a massive outdoor celebration on the streets of Buckhead, Fadó invites everyone to rally friends again this year and celebrate big 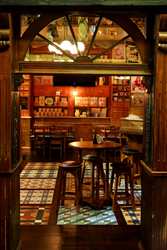 Fadó Irish Pub and Restaurant located at 273 Buckhead Avenue is once again throwing the biggest St Patrick's Day party in Atlanta. With a week long schedule of events planned, including a massive outdoor celebration on the streets of Buckhead, Fadó invites everyone to rally friends again this year and celebrate big. ‘Session On' is a popular phrase in Ireland used amongst friends to describe that eager anticipation before a big day out at the pub. For 14 years there has been no bigger celebration at Fadó then St Patrick’s Day. Session On.

Saturday, March 13th - Party after the St. Patrick's Day Parade in Atlanta
After the crowds, have a freshening pint and a great lunch with the family. Watch 6 Nations Rugby live as Ireland takes on Wales in a bitter rivalry, followed by the Calcutta Cup with England taking on Scotland.  Visit the website for the full schedule. End your night at Fadó with the Live DJ, spinning til 10pm.

Tuesday March 16th
Perfect Guinness Pint Pouring Contest starts early. Talent and dedication is required to make the perfect 119.53 second pour? Only one way to find out. Don't miss the opportunity to challenge some of the best pint pourers in Atlanta.

Pub opens at 6am for those ready, willing and able to start the day off properly with a pint and an Irish breakfast. . Arrive before Noon to beat the $15 cover charge for adults, kids enter at no cost. You must be 21 and over to be in the event area after 4pm.

Street Festival begins at 12 noon with Bagpipers and Irish Dancers start things off at 12:30pm. The Bands kick off at 1pm with something for everyone- from traditional music that includes your beloved sing a longs to our favourite Van Morrision cover band, Astral Freaks. 'Justin' returns this year and will take the stage for a solo set early in the afternoon.

To wrap up St Patrick's Day, it's 'Desire', the best U2 tribute band in Atlanta. DJ Mix will draw the revelers back inside with an energetic mix of hits until late in the evening.

Fadó is also using the hashtag #sessionon on Twitter to keep customers and their friends up to date.
Additionally, Fadó is making it easy to give friends a laugh on St. Patrick's Day with a new site- http://www.FadóIrishToast.com . Pick a toast, upload a picture of your face, send it to a friend and be toasting away like a real Irishman.

Fadó is an authentic Irish pub- it was originally designed and built in Ireland and then shipped to Atlanta where it opened originally in 1996. Fadó serves more Guinness than any other Irish pub in Atlanta, all of which is to the highest standards. All of the Guinness at Fado comes straight from St James Gate, Dublin, Ireland.

To make it a true St. Patrick's Day in Atlanta Fadó will put special emphasis on proper Irish food and Irish drink. This season Fadó will launch Kilkenny Irish Ale to serve along with proper Irish coffees, Baileys Irish cream, and a wide selection of Irish whiskeys. All Fado Irish food recipes are prepared from scratch: the traditional Irish Boxty, Corned Beef and Cabbage, and the Irish pub favorite like Fish & Chips. Fadó spares no expense to bring its customers the best Guinness and Irish food in Atlanta.

About Fadó Irish Pub and Restaurant
Fadó (pronounced fuh-doe) Irish Pub and Restaurant originally opened in Atlanta in 1996. Fadó is distinguished by its genuine Irish hospitality, quality and craic (pronounced ‘crack’, a uniquely Irish form of fun).Fadó has been voted 'Best Of' by a number of local and national publications. Get more information at http://www.FadoIrishPub.com, http://www.facebook.com/FadoAtlanta, or on Twitter @FadoAtlanta