Fadó Irish Pub and Restaurant, located in the Warehouse District at 214 W. 4th, is once again throwing the biggest St. Patrick's Day party in Austin. With a week long schedule of events, including a massive outdoor beer garden and stages for entertainment lining 4th St, Fadó invites you to rally your friends again this year and celebrate big. 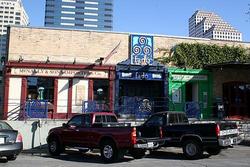 Fadó Irish Pub and Restaurant, located in the Warehouse District at 214 W. 4th, is once again throwing the biggest St. Patrick's Day party in Austin. With a week long schedule of events planned, including a massive outdoor beer garden and stages for entertainment lining 4th St, Fadó invites everyone to rally friends again this year and celebrate big. ‘Session On' is a popular phrase in Ireland used amongst friends to describe that eager anticipation before a big day out at the pub. And, there is no bigger celebration at Fadó then St Patrick’s Day. Session On.

Friday, March 12 - “St Practice Day weekend” begins
The Paddy’s Day countdown is on and we’re celebrating big with live music from the Blaggards and a chance to win tickets to the Fadó outdoor festival on the 17th!

Monday, March 15 - Special St Patrick’s Day Pub Quiz
Bragging rights and great prizes, including tickets to the outdoor festival, are at stake at this all Irish themed trivia contest!

Wednesday, March 17 – Austin's Largest St Patrick's Day Outdoor Festival
4th St will be closed down to make room for a massive outdoor tent, beer garden and performance area. There’s no better way to kick off your St Patrick’s Day than with a pint of the black stuff and a traditional Irish breakfast. Doors open at 6am. Street Festival starts at noon and for the next 12 hours live music on two stages, perfect pints and all the great craic that Austin has to offer.

Thursday, March 18
While the rest of the world recovers, Fadó keeps rocking… Don’t miss a music showcase from Canon Records on the Patio from 4pm ‘til late. Check back to http://www.fadoirishpub.com/austin for the full line up of music.

Friday, March 19
It’s an Irish Band Showcase from 1pm – 8pm with 5 bands direct from Ireland performing live on the patio. Buzzfuel wrap up the night from 10pm ‘til late performing all of your favorite covers from the 80s.

Saturday, March 20 - It’s Super Saturday
The final day of the biggest rugby tournament in the Northern Hemisphere determines its winner. Can Ireland come back and reclaim a second title in a row? Live Music at 10pm with Mysterious Ways, the greatest U2 tribute band in South that rocked St Paddy’s Day 2010.

Fadó is also using the hashtag #sessionon on Twitter to keep customers and their friends up to date. Additionally, Fadó is making it easy to give friends a laugh on St. Patrick's Day with a new site- http://www.FadóIrishToast.com . Pick a toast, upload a picture of your face, send it to a friend and toast away like a real Irishman.

Fadó is an authentic Irish pub- it was originally designed and built in Ireland and then shipped to Austin. Fadó serves more Guinness than any other Irish pub in Austin, all of which is to the highest standards. All of our Guinness comes straight from St James Gate, Dublin, Ireland.

To make it a true St. Patrick's Day in Austin, Fadó will put special emphasis on proper Irish food and Irish drink. This season Fadó will launch Kilkenny Irish Ale to serve along with proper Irish coffees, Baileys Irish cream, and a wide selection of Irish whiskeys. All of our Irish food recipes are prepared from scratch: the traditional Irish Boxty, Corned Beef and Cabbage, and the Irish pub favorite like Fish & Chips. Fadó spares no expense to bring its customers the best Guinness and Irish food in Austin.

About Fadó Irish Pub and Restaurant

Fadó (pronounced fuh-doe) Irish Pub and Restaurant opened in Austin in 1997. Fadó is distinguished by its genuine Irish hospitality, quality and craic (pronounced ‘crack’, a uniquely Irish form of fun).Fadó has been voted 'Best Of' by a number of local and national publications. Get more information at http://www.FadoIrishPub.com, http://www.facebook.com/FadoAustin, or on Twitter @FadoAustin