New York Poker Club Fatty’s Sends Ten of Its Players to the 2010 World Series of Poker Main Event in Las Vegas as Part of a New Docu-reality Television Show, Fatty’s: Where Poker Gets REAL. 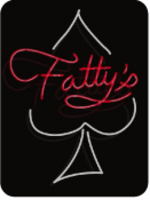 The [Fatty's] players are larger than life, and my hope is the world is ready for these guys. The folks in Vegas won't know what hit them!

Fatty’s Poker Club in New York will be sending ten of its own to the 2010 World Series of Poker Main Event in Las Vegas this July. The lucky ten Fatty’s players include five contest winners, as well as the creators of and featured characters from the new reality television show “Fatty’s: Where Poker Gets REAL”, which is being pitched to major network studios. Fatty’s Club owner and show co-creator Mike “The Nose” Castaldo admits, “Most of our players are amateurs, but they have the right stuff to compete in this major event. A lot of things have to fall our way, but our Fattys are fans of the game and fantastic poker players in their own right!” The Nose cashed in last year’s Main Event, finishing in the top 3% of players who entered. The most experienced player at the club is “Big Al” Riccobono, a poker pro who has also cashed at the Main Event twice and many other WSOP events, and is one of the Fatty’s contest winners. He agrees, “There is no reason why the representative Fatty’s players won’t make a splash. I expect big things from this oversized crew – just wait!”

Fatty’s is represented by the law firm Abrams Fensterman. Earlier this year, one of the partners from its entertainment group approached Mike and Al about filming this project; three months later, fantasy became reality. “The players are larger than life, and my hope is the world is ready for these guys,” said Abrams Fensterman partner and show creator Scott Einiger a/k/a “Scottie Mayhem”. “The folks in Vegas won’t know what hit them!”

About “Fatty’s: Where Poker Gets REAL”
Docu-reality show “Fatty’s: Where Poker Gets REAL” follows New York poker club owner Mike “The Nose” Castaldo, professional poker players and a cast of regular local Joes who will interact with pros and celebrities throughout the year, both on and away from the tables. Celebrity fans of the Fatty’s club include poker star, international model and television host Lacey Jones, a close personal friend of club owner Mike “The Nose.” Go “all in” with them as they prepare each night for celebrity-filled cash games and compete for seats at the World Series of Poker and other major events throughout the year, all the while, trying to balance their everyday lives with their passion for poker. With five tables going and a room full of egos, the game itself is only half the drama. Viewers can also play right alongside the Fatty’s crew online at the Fantasy Game launching this summer on the Fatty’s Poker website, for the chance to win a seat at one of the tables inside the club and other great prizes. Join the Fatty’s crew and play along, as we watch them rise from the ranks of amateur players to the pros, competing against each other and themselves to live out their dreams of making it to the World Series of Poker. Viewers will be able to participate in the World Series of Poker fantasy poker game hosted by Fantazzle.