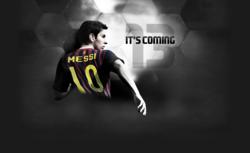 FIFA 13 is set to be the best football game to capture a realistic gameplay feel.

Anxious gamers hungry for a first look at sports gaming’s undisputed superstar should immediately head to FIFA13.com. FIFA 13 trailer captures the dramatic sights and sounds of the most accurate, most fun, football video game ever. The FIFA franchise has always featured cutting-edge graphics, and now the images are paired with an even more accurate intelligent gameplay engine.

This year’s FIFA 13 trailer focuses on how new player intelligence enhancements will yield dramatically better gameplay. Opening with a shot of Lionel Messi kicking off to a Barca teammate, the FIFA 13 trailer emphasizes one on one battles for the ball, across a variety of playing conditions. Wet pitches and realistic shadows are all part of the game.

Each section of the FIFA 13 trailer details a featured part of the pending release.

Battle for Possession details how an improved ‘Player Impact Engine’ make players fight off contact from opponents to gain each precious inch of turf. ‘First Touch Control’ means the ball is much more playable when it first arrives on the foot. A slight slowing shown in the FIFA 13 trailer gives the player a better chance to react.

Attack with Creativity shows complete dribbling control let’s players use a deft touch to fend off challenges and blow by opponents with finesse. Tactical free kicks mean players can dream up and execute or defend free kicks in all manner of creative and tricky ways.

Attacking Intelligence shows how players off the ball react in dynamic and intelligent ways to the unfolding play. In the FIFA 13 trailer, arrows clearly show each players’ smart forward progress.

From Wembley to Estadio Azteca, from Rome to Rio de Janeiro football fans promise to be fully engaged in the beautiful game by FIFA 13. Visit the FIFA 13 trailer at http://www.fifa13.com/news/first-official-fifa-13-trailer-released/1434/ and see why.

About FIFA13.Com
FIFA13.com is the premier news site for the latest developments related to one of the most anticipated video games of the year. Visitors flock to the site to see fresh, accurate and factual news, images, analysis and FIFA 13 trailers. Go to http://www.fifa13.com