In the new MGMbill.org comic book entitled “Foreskin Man #4: The Sünnet Knife”, Miles Hastwick gets more than he bargained for when a voyage to acquire an ancient artifact for the Museum of Genital Integrity goes awry. 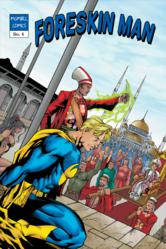 The brutal tradition of sünnet is deeply ingrained in Muslim culture, much the same way that infant circumcision in still prevalent in many parts of America

Today marks the release of the fourth issue of Foreskin Man, the controversial comic book series from MGMbill.org that follows the adventures of an intactivist superhero. In this chapter, Miles Hastwick ventures to Turkey to acquire an ancient artifact for the Museum of Genital Integrity.

When a fateful encounter with a shopkeeper’s estranged son-in-law turns violent, Foreskin Man swiftly becomes entangled in a bloody sultanic ritual. Caught in the middle is Murat Aydin, a young schoolboy who is only just beginning to understand the danger he faces on the road to manhood.

The twisted comic book tale is the newest creation from Matthew Hess, who commissioned three different artists to bring his story to life. Hess is president of MGMbill.org, a San Diego based group working to enact legislation that would protect boys in the USA from being forcefully circumcised.

“The brutal tradition of sünnet is deeply ingrained in Muslim culture, much the same way that infant circumcision in still prevalent in many parts of America,” said Hess. “But that doesn’t mean it can’t be replaced with a peaceful alternative. Rites of passage do not have to be cruel, and I hope Foreskin Man #4 will encourage child advocates in Turkey and other Muslim countries to begin questioning the legitimacy of male circumcision.”

Although lawmakers in a handful of western nations are pushing to ban male circumcision within their own borders, the painful ritual is still considered to be routine in the Islamic world. Nearly the entire Middle East, Northern Africa, and most of Indonesia subject their boys to genital mutilation.

Hess believes that, in time, male circumcision can be phased out in all of those regions.

“Many people once believed that female circumcision could never be eliminated, but steady advances are being made to root out that harmful tradition,” said Hess. “If the momentum continues, one day female genital cutting may become virtually extinct. There is no reason why male circumcision cannot follow that same path.”

Foreskin Man #4 is available to read and download for free at http://www.foreskinman.com. Printed copies are also available for purchase online, or by ordering through a local comic book store.