independent filmmakers start development on "Pixar style" 3D animated theatrical film with the same technology used in "Toy Story" and "Shrek". “FranknSon” will be a 3D Stereoscopic feature animation film which is in development and will go into production next year (http://www.FranknSon.com). 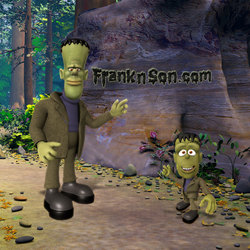 We need to step up to the Hollywood challenge and prove that Indie filmmakers can create world-class 3-D animations and VFX.

"FranknSon" (http://www.FranknSon.com) is a feature-length, 3D animation that has just entered development and will go into production next year. “FranknSon” tells the story of a young monster in search of a family. It’s a tale that will appeal to both kids and adults; as it draws upon the legendary Monsters from the golden age. It is about a forgotten group of Monsters that gets a second chance and a village that needs redemption. It’s a timeless story of love and family, of friendship and loyalty. Apart from great characters, it has a wonderful screenplay. There are elements of the best “buddy movies” with a touch of The Magnificent Seven/Seven Samurai meets FranknSon. In “Franknson” there are heroes we can really care for in the best traditions of Disney, Pixar, or Dreamworks.

Why would an indie group choose to make a 3-D monster animation?

Two reasons - If you look at the top-50 grossing domestic films in the United States, you will find that 40-plus of them were in the fantasy, science fiction, animation, and horror/terror genres. With evolving stereoscopic 3-D tools and a great script in hand, a compelling business case can be made for this kind of production.

The second reason is that it is hard to do, that is, the competition in these genres for high quality films is low. There are only a handful of big studios that can take on a full 3-D feature animation. Most Indie filmmakers believe they don’t have the financing or expertise to pull off high-quality 3-D stereoscopic animation or VFX productions. Yet we all know that the best talent in the industry comes up the indie route, but they all assume their polished upscale project will have to wait until they make it to "Hollywood"—we think this is a false assumption. We need to step up to the Hollywood challenge and prove that Indie filmmakers can create world-class 3-D animations and VFX.

We also all know that independent film productions are still measured against Hollywood big-budget productions. As unfair as this seems, an audience does not care if a producer had only $7,000, $70,000, or millions of dollars to make a movie, it will be compared to a $70-million plus Hollywood production. The digital revolution now allows us to level the playing field, and we intend to do just that.

So who are we? We are a group of artists who have come together to make a monster of a movie. We are defying the odds and making a Pixar-style feature on an Indie budget. More at http://www.FranknSon.com

FrankyBig, strong and stubborn, Franky is a natural leader of the monsters, even if he’s a bit of a closed book.

JUNIORThis little monster has a big heart. He’s rough and tough yet deep inside, he’s a little sad.

HAZELEver since she was stripped of most of her powers by the Witch’s Union, Hazel has been looking for a way to regain her former glory.

VLADVlad’s past glories in the movie industry drive him to recapture the days of his greatest fame. They aslo drive him to tell some annoying anecdotes… frequently.

WOLFYFranky’s best friend and a loyal companion to all his fellow monsters, Wolfy is a good guy to have at your back.

PHARAOHHe’s as ornery as he is ancient. This mummy is driven by the thrill of discovery and what might be revealed by digging deep.