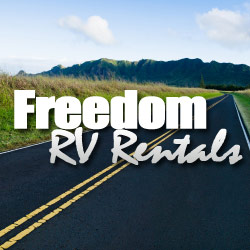 Freedom has put the consumer first for ten years by offering affordable rates during the peak rental season as well as in the off-season.

Freedom RV Rentals, a central Pennsylvania RV rental agency, is celebrating its 10th anniversary in the rental business in 2012. For the past decade, the company has focused on providing an excellent consumer experience to all of its clients. Customers can also rely on Freedom to offer them affordable recreation vehicles for fun-filled Penn State tailgating and other pursuits in late autumn and winter.

Located in East Freedom, Pennsylvania, Freedom RV Rentals has been providing the central Pennsylvania area with camper, travel trailer, and motorhome rentals for the past 10 years. The locally owned and operated company began in 2002 as a way to supply recreational vehicle rentals to the central part of the state, which previously had no such RV rental agencies.

Before starting the company, owner Tom Schneider noticed this void while trying to rent an RV for an upcoming family vacation, causing him to rent from a much more distant location. Of his family vacation, Schneider said, “After having had such a wonderful time traveling in an RV, we wanted to make RV rentals available for other families in the central PA area.”

In addition to supplying the central part of the state with these recreational vehicles, Freedom also strives to provide outstanding customer service. The company works hard to give its clients a worry-free, relaxing, and accommodating experience on board its clean, reliable motor homes, campers, and travel trailers. Freedom has put the consumer first for ten years by offering affordable rates during the peak rental season as well as in the off-season.

Freedom continues to provide customers with reasonably priced rates during the off-season, from the months of October through May. During the beginning of the off-season, in late fall, numerous clients rent RVs from Freedom in order to tailgate at their favorite football games. Freedom is a short drive away from professional and college football games in the big cities of Philadelphia and Pittsburgh, as well as Pennsylvania State University football games in University Park, Pennsylvania.

The Penn State football team has a 6-3 record this season. With two home games remaining, Penn State fans can still rent RVs for tailgating at the upcoming Big Ten Conference games at the end of November. Those interested can visit http://www.freedomrentals.com to see Freedom’s rental availabilities for the Penn State home games versus Indiana University and University of Wisconsin.