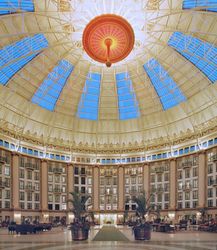 The atrium of the West Baden Springs Hotel

With a score of 89.9 (only 2.9 points away from 2nd place), West Baden outranked 55 other well-known resorts when it was evaluated on activities/facilities, food/dining, location, overall design, rooms and service. This year, 25,008 readers voted for more than 10,000 properties and destinations.

"The big news is that, undaunted by tough times, our readers are still out there, discovering the coolest experiences and reaffirming an enduring passion for travel," said Condé Nast Traveler Editor in Chief Klara Glowczewska. "It's clear that our readers are as devoted to the worldwide diversity of travel as ever."

Originally built in 1902, West Baden Springs Hotel re-opened in May 2007, following a meticulous restoration. Nearly 100 million dollars was spent in a top-to-bottom restoration, which maintained the historic integrity of the building, but upgraded its amenities to that of a four star property.

"Last year we were thrilled to be included in the Reader's Choice awards and on the magazine's Gold List," said Mark Bommarito, vice president of sales and marketing. "To be back this year─ and with a higher ranking─ shows the resort's commitment to offering a quality experience year after year."

West Baden is a part of the French Lick Resort, which as a whole has undergone a 500 million dollar restoration and development project. In what has been called one of the largest private restoration projects in the U.S., the Cook Group saved two turn-of-the-century grand hotels and brought resort life back to Indiana.

No small feat, their work has been recognized by the National Trust for Historic Preservation.

With the opening of the Pete Dye Course earlier this spring, French Lick Resort is quickly becoming America's most talked about golf destinations. Located on a hilltop behind the historic French Lick Springs Hotel - one of the highest points in Indiana - Dye's masterpiece offers stunning panoramic views of over 30 miles. The course will be the site of the 2010 PGA Professional National Championship.

For more information or to book a stay, please visit http://www.frenchlick.com or call our reservation specialists at (888) 936-9360.

The atrium of the West Baden Springs Hotel

The lobby of the West Baden Springs Hotel