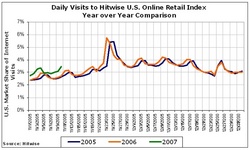 Online interest in Black Friday is taking place earlier this year and becoming more widespread than the past two holiday seasons. Searches on the term "black Friday ads" are up 91 percent compared to last year and have increased 954 percent since 2005. This is a continuing trend as searches for the same term were up 452 percent in 2006 compared to 2005.

Wal-Mart received the most traffic from Black Friday advertising websites for the week ending Nov. 10, 2007 among a select group of brick and mortar stores. Sears and Best Buy received the second and third most U.S. traffic, respectively. In 2006, Best Buy, Circuit City and Sears were among offline brands to receive the most traffic from Black Friday websites.

"Consumers are becoming increasingly more knowledgeable about the availability of Black Friday promotions online and are actively seeking out the websites which offer the advertisements before public release," said Heather Dougherty, director of research at Hitwise. "Much to the chagrin of some retailers, shoppers are well-aware of the leaked promotions and are able to plan their Black Friday purchases before Thanksgiving arrives. While some retailers resist having their sales announced prematurely, others are embracing these sites as a customer acquisition opportunity."

-- Amazon.com remained the most-visited website within the Index last week, receiving 11 percent of visits among the Retail 100 Index. Wal-Mart received the second-most visits with six percent. Overstock.com was the biggest gainer for the week, as their traffic increased 18 percent compared to the previous week.

-- iPods and Uggs were the most popular search terms sending visits to Shopping and Classifieds websites for the week ending Nov. 10, 2007. The terms "ipod", "wii" and "uggs" were the top three product searches. The term "playstation 3" cracked the top 10 product searches for the first time this holiday season.

Hitwise is the leading online competitive intelligence service. Only Hitwise provides its 1,400 clients around the world with daily insights on how their customers interact with a broad range of competitive websites, and how their competitors use different tactics to attract online customers.

Since 1997, Hitwise has pioneered a unique, network-based approach to Internet measurement. Through relationships with ISPs around the world, Hitwise's patented methodology anonymously captures the online usage, search and conversion behavior of 25 million Internet users. This unprecedented volume of Internet usage data is seamlessly integrated into an easy to use, web-based service, designed to help marketers better plan, implement and report on a range of online marketing programs.