Cadyn is a very special little girl. Although she turned five years old on October 6, 2010, the eggs from which she was conceived were frozen in 2001 at the egg freezing program at West Coast Fertility Centers, located in Orange County, California. West Coast is considered one of the leading Centers in the country specializing in the field of fertility preservation. The Center pioneered a freezing method called the Landa Freezing Technology capable of storing embryos and eggs for young patients with cancer and women who wish to extend their fertile years until they are ready to start a family. 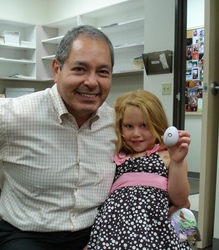 I told Cadyn's mother that she was about to become a medical pioneer by being one of the few women in the world to become pregnant with frozen eggs.

Cadyn’s mom is a business entrepreneur who was busy establishing her career when she decided it was time to start her family. She asked the specialists at West Coast Fertility to thaw the frozen eggs and inseminate them while scientists performed In-Vitro Fertilization and observed the embryos as they developed. At just the right time, the embryos were carefully placed into the uterus under ultrasound guidance. Special fertility enhancing hormones were used to prepare the uterine lining to become receptive to the embryos. After two anxious weeks of waiting, the results of the pregnancy test were ready.

Dr. David Diaz, the West Coast Fertility medical director, phoned the nervous mom. Diaz says, “I told Cadyn's mother that she was about to become a medical pioneer by being one of the few women in the world to become pregnant with frozen eggs. Everyone at the center celebrated in her honor.” The pregnancy began smoothly, but in the last few weeks a dangerous obstetrical condition developed when the placenta was noted to be blocking the birth canal. Fortunately, a cesarean delivery was performed and little Cadyn became the first baby conceived from frozen eggs at West Coast Fertility Centers.

To celebrate this landmark child, the West Coast Staff arranged for a surprise birthday party for Cadyn. A catered lunch was provided and some special guests were invited. A bright and outgoing redhead, Cadyn was presented with a beautiful cake, a princess tiara and a gift certificate to her favorite store. Cadyn even posed with an ultrasound picture of herself when she was just 10 weeks into her mom’s pregnancy. Birthday wishes and lots of hugs were exchanged until mother and daughter wee off to continue the celebration at Disneyland.

Since Cadyn, West Coast has helped 70 patients conceive using the frozen egg technology. The center has a high success rate of 91% egg survival after thawing the frozen eggs. All egg freezing procedures are conducted with patient consent under a special study protocol.

Dr. Diaz and his team of scientists, Antoine La, ELD and Cris Karl, Senior Embryologist, have been invited to present their work in egg freezing at the annual American Society of Reproductive Medicine (ASRM) meeting in Denver, Colorado later in October this year.

To learn more about the egg freezing program at West Coast Fertility, please visit their websites at http://www.ivfbaby.com and http://www.EggFreezing.com .

Egg FreezingEgg freezing allows for the suspension of the biologic clock by freezing a woman's own healthy eggs during her peak reproductive years ad thawing them in he future as needed.

October is Breast Cancer Awareness MonthYoung patients that are diagnosed with breast or lymphoma cancer may fear losing their ability to one day have children. Although chemotherapy and radiation can be life saving, they may also cause difficulties becoming pregnant when a patient wishes to start her family. Young women can freeze her eggs prior to starting chemotherapy.