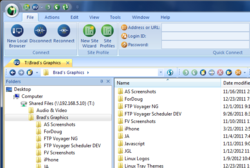 FTP Voyager is about to reset the usability bar for FTP clients the same way Microsoft Office reset it for productivity suites.

The first major FTP client to feature Microsoft's ribbon control will be coming to market soon, now that RhinoSoft has announced a public beta for FTP Voyager version 16.

FTP Voyager's ribbon avoids the clutter found in legacy FTP clients that still use both a menu structure and toolbars to represent the same commands.

"Under the covers FTP Voyager is built more like a scheduler with an FTP client than an FTP client with a scheduler," said Papenthien. "It also shares some components with our Serv-U FTP Server, which helps us develop more efficiently by reducing the number of codebases we need to support."

The forthcoming release, expected in late September, will consolidate previous "Standard" and "Secure" editions of FTP Voyager into a single edition which includes all features.

"One goal of this release is to give people running legacy FTP clients such as WS_FTP® Professional or CuteFTP® Professional an alternative since development on those products has largely ceased," said RhinoSoft VP Jonathan Lampe. "For 30% less money, the new version of FTP Voyager will offer a more intuitive interface, better features and more regular updates, including guaranteed support of Windows 8 and Windows Server 2012."

The year's revamp of FTP Voyager is not the first time RhinoSoft has rebuilt key software from scratch. RhinoSoft's 2008 rewrite of its popular Serv-U FTP Server allowed it to become a market leader in Asia, pace the growth of 64-bit server operating systems such as Windows Server 2008 R2, and expand its reach onto Linux operating systems.