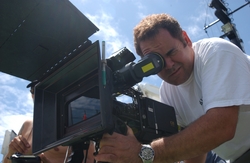 Vince Pace, DP, Co-inventor of the Fusion 3D camera system, and founder of PACE is shown on the set of the current blockbuster film, “Avatar.” Sony HDC-F950 and HDC-1500 cameras were paired with Fujinon lenses during the shoot.

“The road to success in 3D is paved as a team effort,” Pace said. “Working with James Cameron, the goal for the FUSION camera system was significant. Early on in the development phase, Fujinon stepped up with their sales staff, engineering resources, and factory support to design lens suitable for our exacting standards in 3D. That relationship has developed over the last ten years and the results are on the screen with the release of Avatar. All of the cameras were paired with Fujinon lenses and the results were incredible.

Based in Burbank, Calif., PACE is well known for their leading role in high-end 3D production. Pace Fusion 3D systems have been used for several successful box office 3D feature films, including Hannah Montana/Miley Cyrus: Best of Both Worlds Concert Tour, Journey to the Center of the Earth, and Avatar.

According to Pace, Cameron’s shooting style on Avatar was intimate. “He doesn’t hesitate to go handheld,” Pace explained. “He likes scenes being in a state of movement, and he doesn’t hesitate to get behind the camera’s eyepiece, operating where he’s right up there with the actors. Being able to match that style in 3D using the Fujinon lenses was an important factor in the Avatar effort.”

About PACE
PACE is based in Burbank, Ca and specializes in advancing Digital Vision. Working with some of the top Directors in the industry, PACE continues to revolutionize the entertainment experience. PACE developed the FUSION 3D Camera System with James Cameron which was recently used on the production of Avatar. The FUSION system has contributed as the camera platform for more than 1.8 billion dollars of box office receipts. PACE has been at the forefront of all major 3D benchmarks recognized in the industry like U23D, Hannah Montana, Journey to the Center of the Earth, Final Destination IV and most recently Avatar. http://www.pacehd.com

About Fujinon
Fujinon is a major manufacturer and distributor of optics and lens assemblies for the broadcast, digital cinema, and industrial markets. The company's line of television zoom lenses are used in virtually every segment of the broadcast industry, including electronic newsgathering, studio and field production, and high definition television. For more information about Fujinon broadcast and communications products, call 973-633-5600 or visit our web site at http://www.fujinon.com.

Vince Pace, DP, Co-inventor of the Fusion 3D camera system, and founder of PACE is shown on the set of the current blockbuster film, “Avatar.” Sony HDC-F950 and HDC-1500 cameras were paired with Fujinon lenses during the shoot.