Donald Trump is Giving Away Money at FundAnything.com

Billionaire vows to change lives and make dreams come true through the launch of a new website that enables anyone anywhere to raise money for anything. 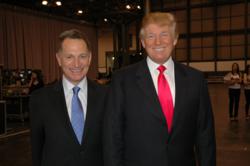 FundAnything is new, it’s smart, and most of all, it’s a great example of American free enterprise.

Business mogul Donald J. Trump announced today that he and Learning Annex founder Bill Zanker have launched FundAnything.com, a website that gives everyone the opportunity to better their lives and fund their dreams.

“People’s lives have been destroyed by this economy and they feel hopeless,” stated Mr. Trump. “FundAnything is a real solution.”

At a packed event held at Trump Tower on Fifth Avenue in New York City, Mr. Trump gave away suitcases filled with cash to three fortunate and deserving individuals who have projects to raise money on FundAnything.com. “I believe the private sector is the real engine for growth and success,” added Mr. Trump. “So, I’ve decided to give away money at the grass roots level….my money is and will be going directly into the hands of real people.”

The first three diverse campaigns that Mr. Trump selected were a medical crisis, a small business crippled by Hurricane Sandy, and an aspiring singer songwriter. All three were at the event and thrilled to receive money directly from Mr. Trump.

Adena Reimer, one of the recipients whose husband James is awaiting a double lung transplant said: “Words alone cannot express my deep gratitude to Donald Trump and FundAnything. This money will make all the difference in the world to me and James.”

FundAnything gives people a way to raise capital to pay for a medical emergency, save or rebuild their home, launch a business, create the next Farmville, write a book, or any other worthy project.

“I’m taking a stand, and am putting my money where my mouth is to help get people back on their feet,” said Mr. Trump during the event. “That’s where FundAnything comes in. It’s the first website that actually lets anyone, anywhere raise money for ANYTHING. And that’s why I support it.”

Mr. Trump intends to give away more of his money to worthy campaigns posted on FundAnything. Each week Mr. Trump will tweet to millions of followers @realDonaldTrump about the people he has selected to help.

“I am positive people will like FundAnything because it’s new, it’s smart, and most of all, it’s a great example of American free enterprise,” said Mr. Trump. “I tell people all the time… ‘no matter what you’re trying to achieve, success requires huge enthusiasm, hard work and yes, money.’ FundAnything is a great way to fund anything and that’s why I believe in it. So if you have an idea, put it up on FundAnything and I might be your first contributor!”

Mr. Trump’s partner, Bill Zanker, is the founder of The Learning Annex, the iconic company that changed adult education in America. “I’m so excited about FundAnything,” revealed Mr. Zanker. “Money is a huge worry for people. You only need a minute on the site to see this is a real game changer! Mr. Trump and I are going to help millions of people.”

For more information or to get started for free, go to FundAnything.com.

About FundAnything
FundAnything is a fast way for anyone to raise funds for anything. Individuals or groups can create campaign pages that highlight their personal stories or needs. Campaigns can offer incentives to contributors such as products, gifts and services. Campaigns can range from business startups, to people dealing with a personal crisis or to celebrate a happy event. There is no limit to the amount of money you can raise.

Contributions go directly to the campaign creators, and they can withdraw their funds almost immediately.

Donald Trump will be selecting campaigns from the site to fund each week and will tweet about the winners.

Now anyone anywhere can raise money for anything!