Funtactix Celebrates One Year Anniversary of The Hunger Games Adventures

Since the launch of The Hunger Games Adventures on Facebook on March 23rd, 2012 millions of fans have stepped into the world of the novels and film and explored an ever-growing world. 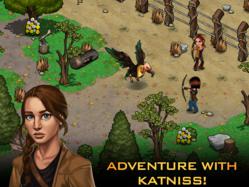 The Official Adventure Game of The Hunger Games

Funtactix, the leading developer and publisher of mobile and social movie-based games, recently celebrated the one year anniversary of the launch of The Hunger Games Adventures. The official social and mobile game of The Hunger Games is available to play for free on Facebook and the App Store.

Over the past year, the award-winning The Hunger Games Adventures has grown along with the fans of the series to include over 1,100 official story-driven quests. Spread over more than 40 content updates, fans have unlocked the official locations of 5 of the 12 Districts of Panem and met the heroes from the first film.

Funtactix continues to break new ground in social and mobile gaming by maintaining a consistent flow of new story-based content for Hunger Games fans on multiple platforms. The Funtactix pipeline allows the team to focus on creating great authentic content and streamlining its simultaneous release across multiple disparate platforms. Using this process, the unprecedented release of content will continue as the story of the game converges with the story of the second film, The Hunger Games: Catching Fire, in theaters November 22nd.

To celebrate the occasion, fans were given access to an in-game gift of supplies to assist them on their adventures in Panem. Visit the Facebook page of the game for more information: http://www.facebook.com/TheHungerGamesAdventures

About Funtactix
Funtactix creates award-winning social and mobile games based on major box office films – including Mission Impossible, The Hunger Games, and Rango. Founded in 2006, the studio has changed the way film creators connect with their audiences and how fans experience their favorite films. Working closely with filmmakers and Hollywood studios, Funtactix is leading the triumphant return of movie-based games: The company's games have rallied tens of millions of players on social platforms like iOS and Facebook. Funtactix is headquartered in New York City with development studios in Los Angeles, Jerusalem and Tel Aviv. For more information, please visit funtactix.com and follow @funtactix.