Future Thought Flashes onto the Big Screen at MIPCOM 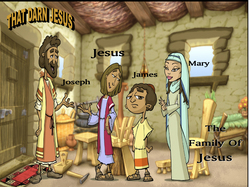 A family portrait from That Darn Jesus: Joseph, Jesus, James and Mary

The talented storyteller, Gary Hardwick and experienced Animation Director Nassos Vakalis, demonstrated great chemistry. They were able to bring about a nice sense of humor to a topical situation and make it funny and believable without being offensive or off base.

Industry professionals following the growth of Adobe's Flash as software of choice for animators will be delighted to hear that Future Thought Productions has produced a nineteen minute segment called "That Darn Jesus" in Flash for the theatrical screen. The animated segment, part of the feature "Universal Remote", written and directed by talented director Gary Hardwick (Deliver us from Eva, The Brothers), is amongst the first known uses of Flash for the big screen.

As part of his full length feature, Hardwick, created the animated segment as a humorous look into the possible teenage years of Jesus Christ, before he takes on his full calling. The entire animated segment was produced in the Future Thought Productions' studio in Mumbai, directed by veteran animator Nassos Vakalis and produced by Jay Zaveri and Steve Kasper.

Jay Zaveri, Founder and CEO of Future Thought and the Executive Producer, Animation for That Darn Jesus states "At Future Thought, it is our goal and desire to create audience and award-winning content that pushes the boundaries of traditional methods of production and distribution. To that end we have built a culture that allows each individual artist the potential for significant exploration. We are delighted to have had the opportunity of once again bringing our technical and creative edge to Gary Hardwick's wonderful production."

Gary Hardwick, who is the creative force behind the short said, "That Darn Jesus is the center piece of the film and it wouldn't work without top-notch animators. We were fortunate to have found Future Thought who knew the animation would look great in High Def. Nassos Vakalis and the India team brought the piece to life."

Steve Kasper, the Animation Producer for That Darn Jesus, indicates, "The talented storyteller, Gary Hardwick and experienced Animation Director Nassos Vakalis, demonstrated great chemistry. They were able to bring about a nice sense of humor to a topical situation and make it funny and believable without being offensive or off base."

This technical and creative achievement by Future Thought Productions comes as no surprise to those who have seen Future Thought's past work. In the past, Future Thought has been recognized as one of the first studios in the world to have used Macromedia's Flash software for the UNICEF television series Meena along with veteran Indian animator Ram Mohan in 2002. Meena, a UNICEF effort to empower the girl child in South Asia and provide valuable education concerning problems related to the developing nations' children. Meena has grown to become a role model for girls in South Asia.

The studio has also worked on Disney's The Buzz On Maggie and on Warner Bros.' Coconut Fred's Fruit Salad Island both of which have been pioneering shows created in Adobe Flash for television. It also co-produces a 3D-CG animation series called OzieBoo!, a three-year-old series of character-animated shorts for pre-schoolers that airs in 40 countries. And last year, Future Thought attracted a buzz on the film festival circuit with its original animated short Haptics, an edgy, 3D-CG satire which has distribution to broadband through Atom Films and has been received very well. It is also available for download through several mobile operators in Europe and Asia as well.

A family portrait from That Darn Jesus: Joseph, Jesus, James and Mary