The Gemmological Association of Great Britain, or Gem-A, was delighted to accept the 2012 Product Innovation Award from Jewelry Television for their GemBasics Course. The distinction was presented to Dr. Jack Ogden, Gem-A International Ambassador, on behalf of the Association during the Tucson Gem Shows. 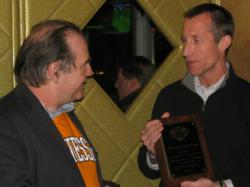 The award is emblematic of the continued strong partnership between JTV and Gem-A and the shared passions of both organizations for leadership in gemstone education.

Exhibiting at AGTA during the Tucson Gem and Mineral Shows,The Gemmological Association of Great Britain reported a very positive response to their GemBasics course, created in partnership with Jewelry Television. Created for gem enthusiasts, jewelry lovers and starting collectors, GemBasics is a fine-tuned introduction to gemology that teaches the fundamentals, from testing to identification. On the evening of Wednesday February 6th, Gem-A’s Jack Ogden was honored with the 2012 Product Innovation Award on behalf of Gem-A, given for “a unique approach for an exciting product classification” as stated on the award plaque. JTV’s Gemstone Division annually presents awards to strategic partners “in recognition of the stellar business relationship developed with the company over the past year.” The Product Innovation Award is presented to the partner bringing an outstanding new idea to an existing category of business. The idea “must be relevant, scalable, and generate incremental sales,” according to JTV.

Regarding acceptance Dr. Jack Ogden states, “We are deeply touched and honored to be presented with this award. It was wonderful to have the opportunity to develop a course that is aimed at the growing number of consumers interested in gems and learning more about them.”

As world’s oldest and longest established provider of gem education, Gem-A was well-positioned to develop a curriculum for those who want to know more about gemstones, without necessarily wanting a gemological degree. JTV, the leading commercial jewelry network, has viewers tuning in daily with an interest in gems and jewelry. The fusion of Gem-A and the network followed a natural partnership, and the course developed out of a collaborative effort from both parties.

Timothy Matthews, CEO and President of Jewelry Television commented, "The award is emblematic of the continued strong partnership between JTV and Gem-A and the shared passions of both organizations for leadership in gemstone education."

Several tools of the trade are provided with GemBasics, including: sealed course notes, a loose-leaf binder, a set of 15 sample gems for examination, and a Gem-A GemKit. The GemKit includes a loupe, Chelsea color filter, London dichroscope, Flexible flashlight, Gem Tweezers, Gemstone holder and a cleaning cloth. Combined, these tools will provide an invaluable gemstone education for those enrolled, who will undoubtedly look at jewelry at gemstones in an entirely new light.

Also during the Tucson Gem Sows, Gem-A sought to honor the memory and sudden passing of Jerry Sisk, Co-founder and EVP of JTV. JTV had Remembrance Bracelets made, which Gem-A staff wore and gave away in their booth in honor of Sisk during the Tucson Gem Shows, a beloved member of the jewelry trade. James Riley, CEO of Gem-A, states, “Jerry Sisk was a true gentleman of the gem industry. He inspired people all over the world and we were truly honored when he spoke at our conference in November. The opportunity to remember Jerry in Tucson with the wristbands was taken up by the majority of the visitors to our booth, many of whom have never met Jerry. Everyone at Gem-A will miss him.”

About Gem-A:
The Gemmological Association of Great Britain, or Gem-A, a London-based non-profit organization is the world’s longest established provider of gem education. A membership organization that forms an international community of gem professionals and enthusiasts, Gem-A seeks to serve the best interests of the gem and jewelry industries worldwide through its commitment to supporting gemological research and the highest educational and trade standards. For more information, visit http://www.gem-a.com.

About Jewelry Television:
Jewelry Television is the only broadcast shopping network that focuses exclusively on the sale of jewelry and gemstones. The privately-held company was founded in 1933 and broadcasts high definition programming 24 hours a day, seven days a week, to more than 80 million households in the US Jewelry Television was recently ranked the 14th largest retailer of jewelry in the U.S. by National Jeweler. JTV.com is fifth largest jewelry destination on the Internet according to Internet Retailer’s Top 500 Guide for 2010. For more information, visit http://www.jtv.com.

The Gemmological Association of Great Britain