Gemstone Development, one of Las Vegas’ largest new homebuilders, announced that CEO Alex Edelstein has launched FrothingDeveloper, a new blog designed to counter the media’s perennially negative spin on the economy and the housing market. 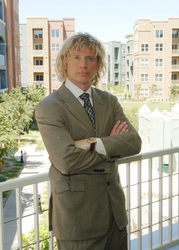 The greatest opportunities come when everyone else is paralyzed by fear, particularly when I know that fear is irrational.

Gemstone Development , one of Las Vegas’ largest new homebuilders, announced that CEO Alex Edelstein has launched FrothingDeveloper, a new blog designed to counter the media’s perennially negative spin on the economy and the housing market. Initially inspired by what Edelstein believes are misleading and negative local Realtor® statistics on Las Vegas home inventory levels, Edelstein created the site to expose the inaccuracies prevalent in today's news stories, and to provide a forum for the positive statistics and facts that get buried at the bottom of back page stories, if published at all.

"If you read and believe all of the negative stories in the traditional media and vulture blogs it's easy to get a skewed perspective on what's really happening in the economy and the housing markets today-- particularly in the local Las Vegas market," said Edelstein, “We’ll go hand-to-hand with anyone who knocks Las Vegas’ prospects without an understanding of our market and the real facts. We kept waiting for the media to pick up the positive news here and finally decided we needed to just get the word out ourselves.”

The FrothingDeveloper name and the site’s iconic logo were inspired by Edelstein’s “rational exuberance”, a play on former Fed Chair Alan Greenspan’s famous line about irrational exuberance in the stock market. While other developers are shuttering projects and downsizing staffs, Edelstein is thriving on the perceived economic pullback, and savoring the leverage it gives him to get his costs down and his developments completed quickly. Not just a pundit, Edelstein actually puts his money where his frothing mouth is. In addition to moving forward with his significant real estate projects, he doubles down on his beliefs with sizable bets in Las Vegas housing futures traded on the Chicago Mercantile Exchange. Wins and losses are detailed in a regular feature on the site. “I love the smell of recession in the morning,” jokes Edelstein, “The greatest opportunities come when everyone else is paralyzed by fear, particularly when I know that fear is irrational.”

FrothingDeveloper provides homebuyers, real estate agents, and others interested in the economy and housing industry with a daily stream of statistically-backed articles highlighting the strength and future of Las Vegas' real estate market , along with clear explanations as to why the media has the story mostly wrong. Stories range from quick notes on new development in Las Vegas to hard-hitting deconstructions of negative articles from the London Times to Newsweek.

The site is located at http://www.frothingdeveloper.com, and has published more than 40 articles in its first two weeks.

About Gemstone Development:
Gemstone Development, is one of the most prolific condominium developers in Las Vegas. Gemstone’s project, Manhattan Condominiums, was the first new mid-rise condominium to be built in Las Vegas since 2002, and at $230 million dollars is one of the largest mid-rise projects in Las Vegas. Manhattan Condominiums sold out its initial 700 units, and finished construction on its last building this year. Gemstone’s newest development, ManhattanWest, is a mixed-use community featuring more than 600 residences, 200,000 square feet of shops, restaurants, offices, and an all-suite hotel. The project is located on 20 acres in Southwest Las Vegas. Gemstone delivers unique, state-of-the-art features such as its ManhattanTransfer® errand service and ManhattanMD® medical services. ManhattanWest can be viewed on the web at http://www.manhattanwest.com. Gemstone can be reached on the web at: http://www.gemstonedev.com.