Viira is a new BlackBerry GTD software application that enables people to leverage the principles of the Getting Things Done action management system from their BlackBerry smartphones. 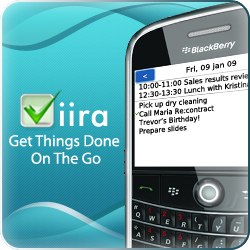 Viira helps people get things done with a BlackBerry smartphone

The response from Viira's users has been phenomenal. People like the ease of use, love the organizational flexibility and increased mobility. Many report a big improvement in their productivity

Karta Mobile Inc. has announced the public availability of release 1.1 of its BlackBerry productivity application Viira. Viira is a mobile software product that brings the principles of the Getting Things Done (GTD) methodology to the hands of BlackBerry users worldwide and is the only software application of GTD on BlackBerry to provide its users with the ability to organize to-do tasks by project, by context and by day.

The release of Viira comes to the rescue of many fans of GTD who have long been frustrated with the lack of an effective and helpful Getting Things Done application for their BlackBerries. Despite the number of available GTD software products, the vast majority of them are Web- or desktop-based and therefore not suitable for on-the-go use.

"The response from Viira's users has been phenomenal. People like the ease of use, love the organizational flexibility and increased mobility. Many report a big improvement in their productivity," reported Chris Balavessov, CEO of Karta Mobile.

Viira offers a quick guide for users on how to jumpstart their implementation of Getting Things Done with BlackBerry. No active network connection is needed thus making Viira suitable for out-of-coverage and roaming areas, as well as for BlackBerry users with limited or no data plans.

Key features of Viira include:

The Getting Things Done methodology was introduced in 2001 when David Allen transformed the world of personal productivity with the release of the multi-million bestseller ''Getting Things Done: The Art of Stress Free Productivity''. Since then, millions of people worldwide have adopted the principles of GTD, from entrepreneurs and executives to creative professionals and technology workers alike.

At its core Getting Things Done advocates that stress-free productivity can be achieved by promptly recording tasks and task ideas as they occur and then classifying them in a trusted system for quick retrieval later when it is time to execute those same tasks. Many see BlackBerry devices as a natural platform for implementing a Getting Things Done system given the ubiquity of BlackBerry devices in business environments and their widespread adoption by professional users.

Getting things done with ViiraA screenshot from Viira's Day View