Disaster management news source, Terra Daily, lists scores of catastrophic global events on their online website, prompting a spokesperson from First Aid Global to proclaim, “All that an individual can do, really, is prepare and go on living.” 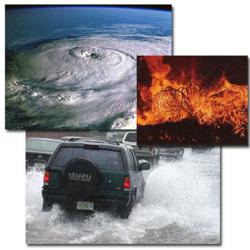 Television shows like ‘Doomsday Preppers’ seem to ride the line between fear and preparation - we get calls from both sides.

Conspiracies and coming apocalypse are being touted by doomsayers, but internet preachers aren’t the only sources of bad news for what is shaping up to be another year of growing catastrophes. Pick up a newspaper or visit an online news source and the list of natural and man-made catastrophes seem to erupt from their pages.

And while out-of-control fires and simmering drought cover most states in America, antibiotics, antimicrobials and antifungals flourish in our waterways while the threat of a national financial meltdown adds to the everyday fear. The list goes on and on.

“Some people choose to ignore the news, while others take it too seriously and live in a world of fear,” says a spokesman from First Aid Global, an emergency preparedness company in Los Angeles. “Television shows like ‘Doomsday Preppers’ seem to ride the line between fear and preparation - we get calls from both sides. For those persons who’ve already begun to stockpile goods, they’re a few steps ahead. All that an individual can do is prepare and go on living.”