Glowing Plant Offers Last Chance to Light Up the World…Naturally

Glowing Plant’s Kickstarter crowdfunding campaign to end on June 7 at 1am EST. 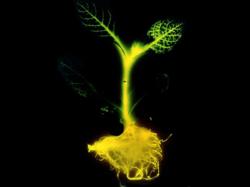 We’re just thrilled to see so many supporters behind the project who are as passionate about biology and sustainability as we are.

Glowing Plant is taking the first step towards creating sustainable natural lighting for the planet by using synthetic biology and Genome Compiler’s software to create plants that glow in the dark. That’s right, the team at Glowing Plant is looking to create light without using any electricity, and has looked to crowdfund the entire project on Kickstarter.

The Glowing Plant Kickstarter campaign was launched on April 23, 2013 and will end on June 7 at 1am EST. Currently, the project has raised almost $450,000 with just two more days to go in the campaign. And, because the campaign has done so well and exceeded expectations, the team behind Glowing Plant decided to take it one step further and set even higher funding stretch goals. Glowing Plant recently reached its first stretch goal of $400,000 where the team promised to create and offer glowing rose plants. But now, the Glowing Plant team is offering supporters a chance to actually take part in the design process of the next glowing plant if the project raises $500,000.

“We’re just thrilled to see so many supporters behind the project who are as passionate about biology and sustainability as we are,” says Antony Evans, Project Manager of Glowing Plant. “We set out to share glowing plants with others and that’s exactly what we’ve done; supporters of our campaign are now able to make their very own glowing plants at home with our Maker Kit.”

Essentially, the team is using a three-step process to insert bioluminescence genes, which allow animals and plants to glow, into flowering plants to make them glow in the dark. The design phase includes designing the DNA sequences using the bioluminescent genes and Genome Compiler, software which allows the team behind the glowing plants to design genetic sequences and order them online. The next phase, print, includes printing the DNA at Cambrian Genomics, a hardware/system for laser printing DNA. Lastly, the transformation phase includes transforming the DNA into the target plant in the Glowing Plant lab.

All of the designs, methods and parts created by the project will be released open source, enabling anyone to improve on them and contribute towards the goal of glowing trees. The team hopes that the parts created will form the foundation of a ‘Biobricks’ movement for DIY Biology.

To learn more about the Glowing Plant project or to order a glowing plant today, visit the project’s Kickstarter campaign page at http://bit.ly/GlowingPlantKS. But hurry, the campaign ends on June 7 at 1:00am EST.

Glowing Plant is a new team of Stanford-trained PhDs who are working towards creating sustainable light by creating plants that glow in the dark. Using Genome Compiler, printing DNA and transforming the DNA into the target plant, the team behind Glowing Plant is going to change the science behind lighting forever right in their Glowing Plant lab in California. To learn more about Glowing Plant, visit http://www.glowingplant.com, Like them on Facebook and Follow them on Twitter @GlowingPlant.