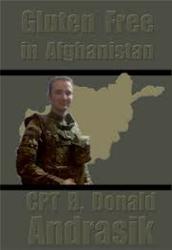 Gluten Free in Afghanistan by CPT B Donald

to provide inspiration to those who feel feel they have struggled with their special diet...

Over 1 out of every 133 Americans suffer from celiac disease, and many more from gluten intolerance. A condition that requires these individuals to strictly adhere to a gluten free diet; which, can be difficult and frustrating to maintain. However, as proven by a compelling new book, the diet can be successfully managed, even among the world's harshest and most dangerous conditions.

As the only book of its kind ever written, 'Gluten Free in Afghanistan' is poised to change the world's outlook on the diet for good.

"When we think of a gluten free diet, we often think of the challenges of going to the grocery store, or the frustrations of being out to eat. In this unique story, CPT B. Donald Andrasik – who has been on a gluten free diet for well over a decade – shares his story of maintaining a gluten free diet while at war in Afghanistan. The daily struggles of his demanding environment are compounded by the hassles and anxieties of needing gluten free food in a part of the world where resources are scarce."

As the author explains, he hopes his book changes the public's outlook on the gluten free diet and how it can be managed.

"I chronicled my gluten free adventure for a number of reasons. First, my overall mission was to increase awareness and promote acceptance of the GF diet and lifestyle. I also wanted to provide an inspirational guide to all of those who feel they have struggled with their special diet, gluten free or otherwise," says CPT B. Donald Andrasik.

Having endured all of the challenges of foreign deployment alongside those of his diet, CPT B. Donald also hopes to raise awareness for his fellow servicemen.

"I hope to draw attention to our service members who need these accommodations to thrive. Being at war and on a gluten free diet is a distinct hardship, and if you know what you are getting into you understand there's no easy meal," he adds.

Since its launch, the book has garnered a consistent string of rave reviews.

"CPT Andrasik puts into perspective being on a medically necessary gluten free diet. While many of us might grumble a bit at the inconvenience of it all, CPT Andrasik shares his experiences in navigating the gluten free life under extremely difficult circumstances. Great read for anyone who is on a gluten free diet, knows someone on a gluten free diet or wants to appreciate the extent to which our service members go to serve their country!" says Bambi Sturgeon, who reviewed the book on Amazon.

Another reader, L. Padden, was equally as impressed. They said that, "As a fellow celiac and Air Force Reservist I enjoyed reading about another military members life with celiac disease. I typically don't read personal stories but when I read about this book from CeliAct I just couldn't pass it up. Sometimes its just nice to know there are other people out in the world going through the same thing as me. Not only did I learn some cross contamination issues, common products that I may not have realized contained wheat/wheat interactions, I found a support group in a sense."

With so much success on his hands, CPT B. Donald Andrasik is proving that the world of special diets can always result in victory.

Born and raised in St. Mary's County, Maryland, CPT B. Donald Andrasik started a gluten free diet at 15 years old, after having symptoms related to celiac disease. After graduating from Chopticon High School he Enlisted with the Maryland National Guard in Jan. 2001, so he could serve his country. He attended and graduated from the University of Maryland Baltimore County in 2005 with a bachelor's degree in psychology and a minor in biology, while earning his commission in the United States Army. He is currently still in the Maryland National Guard. He served a year long deployment going overseas to Kandahar, Afghanistan, returning in May 2012. He currently lives with his wife, son and daughter outside of Baltimore, MD.