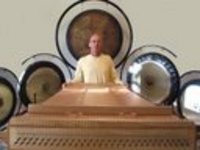 While thousands of clients - celebrity and civilian alike - have experienced the gently healing hands of Dr. James Hopkins, relatively few have had the honor of enjoying the effects produced by his new sound healing services. That will soon change, as Dr. Hopkins celebrates the release of his first CD called Golden Ratios, based on the Pythagorean principles he uses in his revolutionary healing practice. As of June 24, 2008, the CD will be available via New Leaf Distributing, who will feature it at the upcoming International New Age Trade Show®-West (INATS® West; http://www.inats.com/west).

Golden Ratios is actually an instrumental recording of a unique acoustic instrument designed to generate harmonic overtones. The instrument is a massive seven-foot long horizontal cello "bed" with 117 strings that was also designed for a human being to lie on top of it while it's being played. Recorded by Ron Bartlett in a "state of the art" sound stage, the CD contains six tracks varying in length from 3:11 to 18:53 and was mastered by Bernie Grundman Studios.

"What is hard to believe," says Dr. Hopkins, "is that there are absolutely no 'special effects' used on this recording. Everything you hear is pure natural acoustics emanating from the instrument. While nothing can compare to the actual analog experience of lying on top of the instrument itself -- BEING physically present while you 'feel/hear' hundreds of strings actually vibrate, surrounding your body with a Living Geometric Cocoon - this high-quality digital recording is the next best thing."

The profound instruments that gave birth to this extraordinary CD are original creations based on Dr. Hopkins' collaboration with the finest luthiers in the world. The instruments are the result of seven years of research, studying Pythagorean principles after an early retirement from 25 years as a chiropractor in Studio City, CA. To date, there are twelve unique instruments of spectacular design in the doctor's treatment studio; an inspiring series of CD recordings is in the works. Positive word-of-mouth has built Dr. Hopkins a steady schedule of global clients over the past few years.

Innovative film composer Graeme Revell (during his personal healing session) found it hard to believe that the exquisite sounds were purely acoustical & not enhanced by a synthesized or computer. He was convinced otherwise only after examining the entire studio to confirm that there were no connections to electronic components.

Dr. Hopkins says that even though all the 117 strings are tuned to only two notes (D&A), the mathematical combinations produce an infinite series of harmonic overtones known as the Lambdoma Sequence. He calls them "Audible Fractals" and says that the "Harmonic Proportions are to sound what the Golden Ratio is to structure." He describes some of the heavenly sounds as "cosmic symphonic orchestrations, fathomless galactic choirs, transcendental-multidimensional waveforms, audible sacred geometry with a sublime aesthetic."

This doctor-turned-healing-musician advises that this is not simple relaxation music to listen to while entertaining or driving; rather, it should be used manifestly during meditation, contemplation, intentional healing, massage therapy without casual conversation, soul travel, lucid dream cognition, sleep aid, Tantra, yoga intensive, creative processing, raising consciousness, connecting to source & universal intelligence, or what can generally be categorized as "Inner Plane" work.

Dr. Hopkins has dedicated himself to the healing arts for most of his fifty years. He has been blessed with purpose his entire life, finding tremendous satisfaction and personal reward by facilitating the well being of others. As a chiropractor living in the Los Angeles area, Dr. Hopkins cared for a "dream clientele" for over 25 years. Adhering to a strict policy of word of mouth only, he attracted many thousands of high-caliber patients from all over the world. After decades of appreciating an exuberant lifestyle filled with travel and a supremely rewarding occupation, Dr. Hopkins incurred severe arthritis in both hands. Nature had dictated that it was the end of his Chiropractic career. He explained that - to him --" this massive tragedy was like telling Picasso he could no longer paint."

Simultaneous to working through this crisis, Dr. Hopkins came across a book on the life of Pythagoras. Although he remembered nothing about Pythagoras at the time, the information struck a powerful chord in the depths of his Being; a recognition, per se. Something really resonated for Dr. Hopkins when he read that Pythagoras "used music as medicine" and that he used certain sounds, harmonic ratios, intervals and frequencies to treat "conditions." From then on, Dr. Hopkins felt as if he had "moved into a current" to channel this work into his own healing practice. After several years of study and preoccupation with the concept of harmonics as it applies to healing, Dr. Hopkins took a few more years to find master luthiers to finally commission, construct and collect the exquisite, precise and divinely-inspired instruments he now uses for Harmonic Healing and recording.

Dr. Hopkins is making the positive effects of these instruments available to all through a series of Harmonic Healing recordings. The first CD, Golden Ratios, is available in fine gift shops, bookstores, and online. Dr. Hopkins also continues to offer personal healing sessions, live lectures and a series of informational videos online at http://www.youtube.com/user/HarmonixHealing. For more about all of the above, and to book healing harmonic treatments, please visit http://www.harmonixhealing.com.

For interviews or to request CD review copies, contact Beth Ann Hilton, The B Company (http://www.thebcompany.com) at 310.560.8390, or beth@thebcompany.com

ABOUT THE ARTIST:
Dr. James Hopkins is a sound-and-music-based healer, and a chiropractor for 26 years, living in Los Angeles, CA. After nearly a decade of studying the concept of Pythagorean harmonics as it applies to healing, he has commissioned master luthiers from around the globe to create a collection of exquisite, precise, "divinely-inspired" instruments that he uses for personal healing sessions and for recording healing CDs. The first CD, Golden Ratios, will be distributed via New Leaf Distributing beginning in June 2008. For CD, healing session and lecture info, visit http://www.harmonixhealing.com, or view his YouTube videos at http://www.youtube.com/user/HarmonixHealing

ABOUT THE CD:
Golden Ratios is a high-quality digital recording based on the Pythagorean principles that Dr. James Hopkins uses in his coveted sound healing sessions. He uses custom designed instruments that generate exquisite harmonic overtones. One instrument is a massive seven-foot long horizontal cello "bed" with 117 strings. It is also designed for a human being to lie atop of it while it's being played. Recorded by Ron Bartlett in a state-of-the-art sound stage, the CD contains six tracks varying in length from 3:11 to 18:53 and was mastered by Bernie Grundman Studios. It will be distributed via New Leaf Distributing beginning in June 2008. For CD, healing session and lecture info, visit http://www.harmonixhealing.com.