Ingenious New Golf Putting Aid Helps Golfers Read the Break on the Greens Like the Pro’s and Sink More Putts.

Using the EEZ-READ is the simplest way to sink more putts. Designed to build putting confidence and shave strokes off every golfer's game this unique golf putting aid, endorsed by legendary golf instructor Butch Harmon, offers a new “level approach” to reducing the number of putts per round. 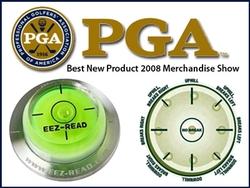 I love the EEZ-READ! We use them all the time in our golf schools and even in practice rounds in golf tournaments, you can take them out and lay them on different parts of the green to get an awareness of the slope on the green.

Slightly bigger in diameter than a quarter, but packing a mighty putt-reducing punch, is the breakthrough golf putting aid that helps golfers practice (and play) like the pros. It is the EEZ-READ golf putting training aid, the brainchild of Robin Austin and winner of the “Best New Product” at the 2008 PGA Merchandise Show. Many of the top PGA Tour caddies are currently using the EEZ-READ to quickly and accurately chart the breaks on greens.

The inspiration for this unique putting aid came to Austin during a visit to the Baltusrol Golf Club when it was hosting the 2005 PGA Championship.

Austin noticed that after the pros completed their practice round their caddies jumped into golf carts and went back over the course plotting the greens (which includes making notes about the breaks). He recognized how time consuming but necessary the process was. Then the wheels began to turn.

Austin began to wonder how he could help amateur golfers, who typically learn about the breaks on the green from actually playing the course, improve their game. From his own experience on the golf course, and as witnessed by many golfers, slow play can be attributed to golfers who spend a lot of time “studying” the green during a round to figure out their line. Austin decided there had to be an easier and quicker way to get accurate readings.

Enter the EEZ-READ golf putting aid. Think of it as a circular, precision level the size of a quarter, mounted on a stainless steel watchmaker’s base. Small enough to fit in a pocket, yet tough enough that it’s guaranteed for life.

When asked how it works, Austin said, “To get the most accurate reads on the green, you’ll need to take two readings. First, place the EEZ-READ halfway between your ball and the pin to get the overall break. Then place the EEZ-READ six inches from the pin to see if the break carries all the way to the hole.”

When the bubble in the EEZ-READ’s window appears in the middle of the circle, it means there is no break at all. However, if looking at the EEZ-READ bubble as though it were the face of a watch:

Then there are the variations on the location of the bubble:

A simple visual chart comes with every EEZ-READ to help owners get the most out of this ingenious golf training aid.

“The EEZ-READ was tested by over 600 PGA Tour partners who gave it an overwhelming endorsement. For low handicappers it shaved 3 strokes off a round. Plus it helped them build confidence in their game,” explains Austin.

He is very proud of the fact that caddies gave him the idea for his EEZ-READ putting aid and that now many use it to help them easily read the greens. According to Austin, “70% of the golfers who are shown the EEZ-READ really light up with how useful and easy it is. As far as I’m concerned, anything that helps boost confidence and speed up play is a good thing!” It is also a great reminder that sometimes it’s just good to go out and play a practice round.

"In fact," says Austin, "two of the top benefits of using an EEZ-READ are how much it speeds up play and how it boosts your confidence". As for the “loving it” crowd, Austin mentioned teaching pros, beginners, seniors/retirees and serious golfers/low handicappers.

A free EEZ-READ iPhone App, that simulates the functionality of the actual device, is currently available for download at the Apple App Store.

At just $14.99, the EEZ-READ is also quite easy on the wallet. So, while owning an EEZ-READ is not a big investment, it is likely to yield some fantastic returns on the greens.

Purchasing this one-of-a-kind putting aid is quick and simple from the EEZ-READ website. The EEZ-READ putting aid can also be found at selected retailers and pro shops like Golfsmith and more.

Lastly, Austin asserts, “Confidence in your putting game can take a lot of pressure off your tee shots. The way I see it, you can’t go wrong investing in an EEZ-READ. The cost-benefit ratio is excellent and the numbers speak for themselves.”

To learn more about the EEZ-READ or to purchase this handy putting aid, visit their website at http://www.eez-read.com.