Goodnight Burbank becomes the first ever web series to become a scripted half-hour comedy to debut on the internet. It stars Laura Silverman, Dominic Monaghan and a host of familiar faces from TV including John Barrowman, Juliet Landau and Miracle Laurie. The first six episodes will be distributed on Hulu. 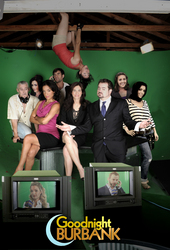 The cast of Goodnight Burbank

"It's an amazing cast coupled with great scripts" - Dominic Monaghan

Evil Global Corporation today announced the premiere of its flagship, award-winning series Goodnight Burbank as the first-ever scripted half-hour comedy to debut on the Web (http://www.goodnightburbank.com).

"Goodnight Burbank has received tremendous response over the last five years withviews numbering in the multi-millions and a fan base constantly demanding to see more. We're answering that call with a longer format, new top-tier talent and the extended length which allows us to explore the characters in a more in-depth and satisfying way," says Hayden Black, CEO of Evil Global Corp and the creator/writer/Executive Producer of Goodnight Burbank.

The new half-hour series makes its debut the week of April 25th 2011 on the ad-supported, free Hulu.com and the Hulu Plus subscription service. Co-Star Laura Silverman says, "Goodnight Burbank is smart and funny, and shows that you can take quality content (in a short, five minute format) and turn it into traditional long form that we are sure everyone will love and enjoy.”

Goodnight Burbank takes a look at the men and women who bring us our nightly news during an actual real-time newscast. Cleverly combining real news and a cinema-verite styled look at what the anchors then talk about once they're "off-mic", Goodnight Burbank is a smart and irreverent comedy about politics and people.