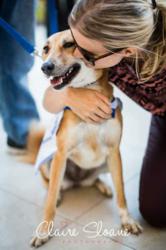 Adpot a pet through the RAK AWC

We would like to convey the biggest THANK YOU to Grace Century for showing their support of RAK AWC by donating the final AED 2,000 required to send three more dogs to Canada this year.

Hundreds of visitors came to the Al Hamra Mall on March 22nd interested to learn about all of the work Ras Al Khaimah Animal Welfare Centre (RAK AWC) is doing to find homes for homeless animals in the RAK area.

RAK Animal Welfare Centre's mobile clinic, in which veterinarian Dr. Chenjerai Sigauke provided services to attendees was also very popular. The RAK AWC vet clinic is open to all pet owners in Ras Al Khaimah each work day between 2pm and 5pm, as well as on Thursdays from 10am to 12pm and on the first Saturday of the month from 9am to 12am.

"Our dogs and cats also managed to draw quite a crowd of curious onlookers, some more brave than others when they came face to face with our furry friends," said an RAK AWC spokesperson. "We would like to thank all of our volunteers who helped us make this day possible and Al Hamra Mall."

The RAK AWC team managed to raise enough towards sending a number of area dogs to Canada.

Scott Wolf, President of Grace Century FZ LLC, donated the final amount RAK AWC needed to send three additional dogs to Canada. "This is a small amount, which will go a long way to improve the welfare of these animals and that will make such beautiful family pets. We will continue to support the RAK AWC as much as we possibly can.” Mr. Wolf added, “Dr. Chenjerai and the RAK AWC staff do wonderful things in this area to not only provide adoption opportunities, but also exceptional pet healthcare for the residents of the RAK."

The RAK AWC spokesperson added, "We would like to convey the biggest 'thank you' to Grace Century for showing their support of RAK AWC by donating the final AED 2,000 required to send three more dogs to Canada this year. We are so very grateful (to Grace Century)--and know the dogs will love you forever for it!"

The organization also hopes to send dogs to some great homes in The Netherlands later on this year.

About the Ras Al Khaimah Animal Welfare Centre (RAK AWC)
Ras Al Khaimah Animal Welfare Centre (RAK AWC) was the idea of Melissa Davis and under the support and patronage of His Highness, Sheikh Saud Bin Saqr Al Qasimi, and the RAK Government, has progressed continuously ever since. The shelter was opened in January 2010 and with the help of a few employees and many volunteers, it is growing into a centre of excellence where the animals of Ras Al Khaimah receive the necessary care. Their mission is to improve the welfare of all the animals in Ras al Khaimah. For more information visit: http://www.rakawc.com.

Searching the Globe for Opportunities