California company Gruv Gear announces new artist endorsement deals with musicians from the nation's top television show, American Idol. With over 17 million viewers tuning in to the massively popular TV show just the week prior to finals, house band players and Gruv Gear artists Rex Hardy Jr. and Roland Gajate Garcia enjoy the best jobs in the world as professional musicians supporting the contestants in the heart of Hollywood. 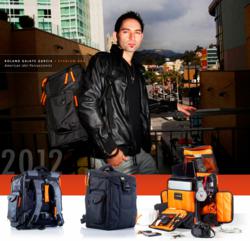 The guys not only chose to endorse world-class bags and utility carts, but a brand that allows them to exude professionalism both on- and off-stage...

"We met Roland Garcia through a mutual friend, and he expressed great interest in our products to help make his life easier as a working musician," says Jay Baldemor, President of Gruv Gear. "He had finished Season 10 as the percussionist on American Idol, backing up the 2011 artists including Scotty McCreery, Pia Toscano, Haley Reinhart, and Lauren Alaina. Roland approached us and not long after we signed him on as on official artist endorser." Roland currently uses the V-Cart Solo personal gear cart to transport his congas with much less effort, and the Stadium Bag backpack to carry smaller other percussion instruments. It even attaches to the handle of the V-Cart to offload all the weight and make everything a cinch to move between studios to clubs.

Rex Hardy Jr., drummer for Idol as well as for Mary J. Blige, joined the family of Gruv Gear endorsers shortly after the start Season 11. "Rex was very impressed with the Stadium Bag after getting a full rundown from Roland, and we met up in LA shortly after to make it official," recalls Jay. "We appropriately chose to do his artist photo shoot at the Nokia Theater, the venue for Idol's grand finale, which worked out really well!" Rex now uses the Stadium Bag, the largest multi-use tech backpack in Gruv Gear's Venue Series, to carry drumsticks and other accessories, as well as personal tech gear including his laptop, iPad, chargers, iPod and more.

With a hectic weekly schedule of live TV recordings and studio tracking sessions at Interscope Records for iTunes every weekend, Rex and Roland take their profession seriously, and the gear they choose to use must perform top-rate. The guys not only chose to endorse world-class bags and utility carts, but a brand that allows them to exude style and professionalism both on- and off-stage, a mantra that Gruv Gear continues to embrace through thoughtful, unique and innovative products.

At the time of this press release, Roland and Rex prepare to perform with the final two contenders Jessica Sanchez and Phillip Phillips at the grand finale, and the winning performer announced. In the past weeks, Rex and Roland have both been featured on performances by the top contestants including Joshua Ledet, Colton Dixon, Hollie Cavanagh, Skylar Laine, Deandre Brackensick, and Elise Testone.

To learn more about the Stadium Bag, V-Cart Solo, and other products by Gruv Gear, visit http://www.gruvgear.com.

Gruv Gear designs and builds innovative utility gear and accessories for creative professionals, including musicians, DJs, photographers, cinematographers, film makers, audio/video engineers, and media crews. Founded by a musician and product designer, the California-based company has been seeing tremendous forward momentum and widespread acclaims in a very short time, with global patents pending for its current innovations and more game-changing products slated for this year and beyond.

Gruv Gear products are currently distributed in the USA by Musical Distributors Group, in Europe by Adam Hall GmbH, and in Canada by Heartbeat Distributors Ltd.