California-based music accessories manufacturer Gruv Gear has announced a new destination on its website where exclusive videos of artist endorsers will be released. With the company's growing roster of some of the world's most influential musicians, recording live sessions was a natural step to help foster original music and collaboration between its diverse artists. The debut video series features Gruv Gear's very first endorsers, bassists David Dyson and Damian Erskine, joined by one of 2012's major artist recruits, drumming legend Ricky Lawson. 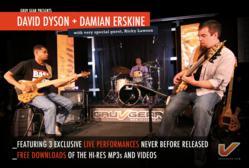 Three of the artists’ original compositions were recorded live in Anaheim California for this premier release. Originally scheduled to be a bass guitar duet as a co-marketing campaign with bass maker Skjold Design Guitars, with whom both bassists have built signature instruments, the addition of Ricky Lawson was a welcome and pleasant surprise.

“We had arranged Damian and David to be at the studio that week,” recalls Jay Baldemor, President of Gruv Gear. “It was literally just the day before that we were finalizing Ricky’s artist endorsement. We were sitting in his studio and I was admiring his wall of gold and platinum records, including Michael Jackson’s “Bad” album in which Ricky played the tour, Lionel Richie’s “Dancing on the Ceiling,” and Whitney Houston’s “I Will Always Love You.” The question regarding laying some drums on the session came up casually towards the end of the visit, and Ricky graciously accepted. The following morning he showed up and the guys gelled as if they’ve been playing together for years!

David and Damian had previous ad hoc “jams” at music events before, but this was to be their first formal recording together. David brought his usual ferocious funk/jazz vibe to the mix, hailing from decades of experience with the likes of Pieces of a Dream, Lalah Hathaway, Jonathan Butler, New Kids On The Block, and George Duke. Damian’s brooding melodic approach and chordal work complement the otherwise unusual duet of instruments in the same sonic register. Damian draws from a diverse palette as well, boasting touring and recording credits with the Peter Erskine New Trio, Les McCann & Javon Jackson, Gino Vannelli, and the Jaco Pastorius Big Band, to name a few. The unique combination of musicalities was captured within two short hours, and came out so well that it required hardly any post-production audio work. Erskine’s composition titled “Bestowal” kicks off the first of this 3-part session series, with subsequent songs to be released every two weeks.

The debut installment of Gruv Gear Sessions can be found at http://www.gruvgear.com/sessions. High-resolution MP3s and videos are also being made available as free downloads to enjoy in your iPods and iPads.

About Gruv Gear
Gruv Gear designs and builds innovative utility gear and accessories for creative professionals, including musicians, DJs, photographers, cinematographers, film makers, audio/video engineers, and media crews. Founded by a musician and product designer, the California-based company has been seeing tremendous forward momentum and widespread acclaims in a very short time, with global patents pending for its current innovations and more game-changing products slated for this year and beyond.

Gruv Gear products are currently distributed in the USA by Musical Distributors Group, in Europe by Adam Hall GmbH, in Canada by Heartbeat Distributors Ltd., in India by Rockin' 24/7, in Lebanon by Labex , and in Japan by Hand Truck Japan Corporation.