Scientist Robert L. Peck reports in his article, Girding for Health, that the ancient West relied upon girding the loins to increase the health and capability of the body. Peck surmised that the method was so powerful that the writings describing how it was to be done were destroyed in the West and hidden in the East to safeguard the dictatorial power of rulers. However, the author found a number of extant Sanskrit documents that describe in detail how girding the loins can be easily learnt as well as confirm its power of increasing health. Peck demonstrated the power of girding the loins with a group of people trained in the ancient practice, who were all able to respond to a stimulus twice as fast as untrained adults and who were even faster than middle school children. 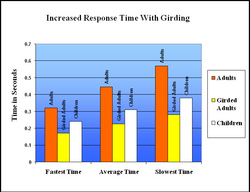 A spectacular finding of Peck's experiment is that the trained group of adults could respond faster than the group of children. This proves that the normal loss of response to the outer world due to aging can be reversed with the practice of girding the loins.

Girding your loins refers to an ancient yet now proven method of increasing the power and health of the body and mind. In his latest article, Girding for Health, now posted on ControllingYourHormones.com, research scientist Robert L. Peck reports that following the ancient advice to gird your loins can produce claimed benefits. Peck, who is known for his work in the transformation of energy, discovered that the ancient world made a science of the ability of the loins to produce healing by means of an energizing nectar which he recognized as special hormones.

According to Peck, the ancient practice of girding the loins was first developed by successful warriors such as the Mithraic soldiers, and he surmised that the technique of increasing one's physical and mental powers was initially hidden from opposing warriors and rulers. With his training, experience, and knowledge of Sanskrit, Peck was able to translate the hidden ancient Indian documents that offered a scientific description of the loins as well as the practice of girding. This practice survives to some degree in the modern martial arts and yoga, but with a loss of the full power of girding.

From the Sanskrit Peck carefully extracted the ancient method of girding which he then taught to a group of mature adults and then measured their response time to verify the claims of ancient soldiers. In this experiment, Peck compared the response times of the trained group of adults to that of a group of untrained adults and a group of children. In Girding for Health, Peck provides the data which shows that those trained in girding their loins proved its efficacy by being able to respond and move twice as fast as the adult group without girding.

"A spectacular finding of Peck's experiment is that the trained group of adults could respond faster than the group of children. This proves that the normal loss of response to the outer world due to aging can be reversed with the practice of girding the loins."

The author, Robert L. Peck was trained and served as a pharmacist in the medical department of the U.S. Army. He later majored in physics and published papers in metrology at the old U.S. National Bureau of Standards. He obtained a number of fundamental patents in the field of energy conversion and synthetic membranes with natural selective characteristics. His interest in energy conversion led him to study ancient views of the energy exchanges within the human body about which he wrote several technical books.