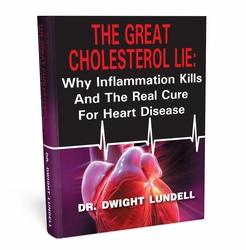 Most of the surgeries could have been easily prevented had the patients been given the right information about what causes heart disease.

With over 25% of the population taking statin medications - and with many being urged to do so preventatively - thoracic surgeon Dr. Dwight Lundell's new book, "The Great Cholesterol Lie" could not be released at a more important time.

The need for this information is greater than ever as indicated by a recent on-line promotion of the book that brought sales throughout the USA and in 17 countries worldwide.

Dr. Lundell's new book is based on his vast experience as a cardiac surgeon who performed over 5,000 open-heart surgeries spanning a quarter of a century. Says Dr. Lundell, "Most of the surgeries could have been easily prevented had the patients been given the right information about what causes heart disease."

Much of the conventional wisdom in treating heart disease is based on a study that lacked scientific fact known as the "The Framingham Study" that began in 1948. This group of scientists and researches believed they stumbled on the cause of heart disease, cholesterol--a theory that has stuck and held throughout six decades despite overwhelming science to the contrary.

As Dr. Lundell states, "It is maddening that medicine has continued to chase and endorse the cholesterol theory while heart diseased continued to soar during my 25 years performing surgeries. I wanted to see heart disease cured rather than patched. By treating inflammation, the heart will heal."

Dr. Lundell's book shows how inflammation is responsible for heart disease and numerous other illnesses such as diabetes. It also shows how simple dietary changes and supplements can replace ineffective cholesterol drugs, where to find them, and how to avoid buying so-called "supplements" which are little better than placebos.

The book details how low-fat and no fat foods created from the cholesterol theory are the very foods that are the cause of an epidemic of inflammation and obesity.

He explains foods that cause the greatest harm and foods that reduce inflammation giving heart disease sufferers a new lease on life with the ability to live healthy, energetic and disease-free lives.

He even details an "eating out" guide showing how to eat in restaurants and fast food establishments safely without risking more inflammation.

In a recent online-only promotion, "The Great Cholesterol Lie" sold throughout the USA and in 17 countries worldwide. At http://thecholesterollie.com there are rave reviews from grateful readers, many of whom found his book to literally be a life-saver.

Dr. Lundell is now releasing the book worldwide in downloadable form so that its lifesaving advice can be made available to anyone around the world who needs it instantly.

For more information about Dr. Lundell and The Great Cholesterol Lie, please visit http://thecholesterollie.com or visit book blog at http://inflammationawarenessnow.com.