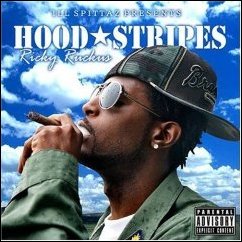 This album has 21 tracks of powerful, new, hip hop music that promises to put the Winston-Salem/Greensboro, NC area on the music map.

Ricky Ruckus, who is fast gaining the reputation as the "best all-around unsigned hip hop artist in the game,” has earned this reputation with an unusual ability to create songs. Rap Pages magazine agrees; see this Rap Pages Magazine link:

"Lil' Rick" a.k.a. "Ricky Ruckus" was born in Washington, DC on September 18, 1983. He moved to Winston-Salem, North Carolina in 1996. He earned the name "Lil' Rick" from his father Big Rick, and the name "Ricky Ruckus" because of his furious rapping method. His masterful mic skills and "in your face" attitude come from the many battles that this young rapper faced as a challenger.

Ricky Ruckus became serious about rapping while attending high school. At the same time, DJ’s took notice and started giving him radio coverage -- DJ’s like “DJ Ceasefire” (Shadyville/102 Jamz/http://www.102jamz.com/). With the increased radio coverage, came challenges from other rappers, which only helped provoked him to hone his skills even more. With radio coverage, his name skyrocketed and he became well known in North Carolina and some parts of Virginia. It allowed him to open shows for Jay-Z, 3-6 Mafia, Mike Jones, Slim thug, The Game, Juelz Santana, Young Jeezy, Lil Wayne, Juvenile, U.T.P, Franchise Boys, Bow WoW and Life (2002- current).

Ricky Ruckus’ popularity is represented by the spirited response that he receives on MySpace: http://www.myspace.com/RickyRuckus.

Ricky Ruckus has released several CD’s. His latest work is a non-mixtape that is scheduled for release in later this month entitled “Hood Stripes.” His previous non-mixtape release, which can be found on every major music website, is entitled "The Streets, My Life."

Ricky Ruckus understands how the music business works. He understands that an artist must always have new music in circulation. To that end, Ricky’s released several mix tapes, including “Motivation Mixtape: Gangsta Grillz", "Motivation Mixtape: Most Hated", “M.O.N.E.Y” and has been featured on numerous mixtapes. Right now, Ricky Ruckus is concentrating on getting the right major deal, instead of hastily signing a deal that might put him on a “shelf". Also, he is working on new material for video and audio mixtapes -- all while pursuing his college degree from Winston-Salem State in North Carolina.

Ricky Ruckus is the best all-around, unsigned, hip hop artist in the game. Soon, the music industry -- and the world -- will know about this powerhouse of an artist, entertainer, and skillful lyricist.