The "No Man Left Behind" monument will be placed at the front entrance of the Warrior Hope and Care Center aboard the Marine Corps Base, Camp Lejeune in Jacksonville, NC on March 8, 2013. 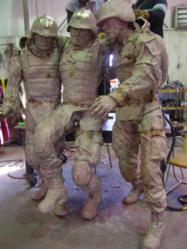 "No Man Left Behind" Monument

I express myself through my art and this monument is a labor of love for me. Love for not just my son but for my growing Marine Corps family.

The unveiling of a new monument will take place on March 8, 2013 at 2 p.m. The monument is placed at the front entrance of the Warrior Hope and Care Center aboard the Marine Corps Base, Camp Lejeune. Hope For The Warriors® (http://www.hopeforthewarriors.org) commissioned the creation of the monument as tribute to all wounded and fallen service members.

Media wishing to cover this event should contact the Camp Lejeune Base Public Affairs Office at 910.451.7414 no later than 4:00 p.m. Thursday, March 7. Members of the media who have RSVP’d will meet at Camp Lejeune Main Gate on Friday, March 8 at 1:15 p.m. to be escorted to the event.

The monument is based on the iconic photograph titled Hell House, captured by acclaimed combat photographer Lucian Read (http://www.lucianread.photoshelter.com). As battle raged, (then) 1st Sgt. Bradley Kasal, USMC, risked his life for the lives of his Marines. Kasal pushed through enemy fire to shield a wounded Marine from a grenade explosion. The photograph depicts Chris Marquez and Dane Shaffer, both Lance Corporals in the Marine Corps, carrying a bloody Kasal out of the house to safety.

The sculpture was created by artist John Phelps, a man who understands firsthand the weight of war. His son, LCpl. Chance Phelps, USMC, was killed in action in April 2004. The HBO® movie, Taking Chance, chronicled the journey of the Marine escort who brought LCpl. Phelps home. Since the loss of his son, Phelps has become an advocate for wounded warriors and for other Gold Star families. He is heavily involved with both Hope For The Warriors® as an Ambassador of Hope® and coordinator for the Outdoor Adventures Program.

“I am honored to work with Hope For The Warriors® in creating this monument,” Phelps, a Vietnam Veteran said. “I express myself through my art and this monument is a labor of love for me. Love for not just my son but for my growing Marine Corps family.”

The sculpture is approximately 10 feet tall and 13 feet wide and mounted on a pedestal.

The monument Phelps constructed honors those wounded in the line of duty. It represents the ultimate price of battle, and the spirit of brotherhood and dedication known by service members and their families. Another monument will be placed in front of the Warrior Hope and Care Center aboard Camp Pendleton in California at the end of March. Funds for the monuments were raised by North Carolina Credit Union League and Balfour Beatty Construction.

“Hope For The Warriors® is proud to partner with Gold Star father John Phelps to present a monument that symbolizes the strength and courage of our warriors,” Robin Kelleher, Hope For The Warriors® President said. “The monument and the opening of the Warrior Hope and Care Center have been a long-time vision for our organization.”

The concept for the Warrior Hope and Care Center was conceived by Hope For The Warriors® leadership. In early 2007, principals of the organization attended the ribbon cutting for the Center for the Intrepid (CFI) in San Antonio, Texas. CFI provides rehabilitation for wounded service members with the goal to return service members to the highest levels of physical, psychological and emotional function.

Bronze miniature replicas of the sculpture will be numbered and issued in limited edition; resin miniature replicas will be available soon for a small donation. Funds raised will support programs within the Warrior Hope and Care Center and beyond. To inquire about the replicas, e-mail rcork(at)hopeforthewarriors(dot)org.

Hope For The Warriors® has earned a Four-Star Rating from Charity Navigator (http://www.charitynavigator.org), an independent organization that evaluates fiscal responsibility and accountability of nonprofits.