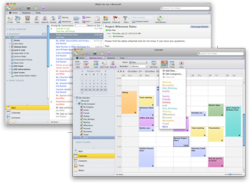 By deploying Outlook for Mac, Apple users can take advantage of improved user interface, PST support and an email platform that is similar to Microsoft Outlook 2010.

Microsoft Outlook for Mac 2011 offers a number of upgrades to Entourage 2008, including a completely new user interface based on the ribbon design. Ribbon is a tab-based navigational tool that allows users to quickly move from one section of the toolbar to another by selecting the appropriate tab.

Outlook for Mac 2011 also includes a number of features designed for collaboration. By allowing users to share calendars, documents and other files, employees can stay connected to one another and easily work together on projects. A new conversation view feature allows users to organize messages in a cohesive thread, making it easier to follow an extended conversation and minimize inbox bloating.

PST support is another important feature in Outlook for Mac 2011. Using PST tools, users can consolidate their various email addresses under one account, making them all accessible through Outlook. It also encourages the archiving of emails for data security and retention purposes, allowing users to freely transfer emails between Windows and Mac versions of Outlook.

For PC users that are facing a switch to the Mac, Outlook for Mac 2011 should seem familiar. The program is quite similar to Outlook 2010, making it easy to use with little need for training or instruction.

"Customers are increasingly using email services for more complex functions," said Tim Attwood, Product Manager at SoftCom. "Using Outlook developer tools, users can even create macros, customize forms and view VB code. Outlook for Mac 2011 allows users to get the most out of their email, making it an important part of our Hosted Exchange Email service."

Microsoft Outlook for Mac 2011 retains one primary function from Entourage - its compatibility with Microsoft Exchange Server and Exchange Web Services. The two programs are able to maintain communication with each other, fostering efficiency and reliability in web hosting environments.

With the upgrades included in Microsoft Outlook for Mac 2011, myhosting.com can provide Apple users with a fully featured hosted email service, allowing them to maximize their messaging productivity.