Exhibition Uses Original Fossils to Explore "Tree of Life"; World's Most Famous Fossils: of the 20th Century, "Lucy" (AL-288-1) and of the 21st Century, "Ida" (Plate B), Both On Display in Times Square 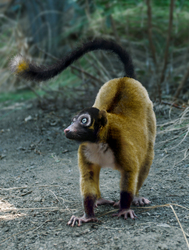 Re-creation of what Ida would have looked like in life, by Paleoartist Viktor Deak.

In a way, every fossil is a missing link. Evolution doesn't produce one line. It's like a blueberry bush. There are many branches and side branches

When the famous 3.2 million-year-old hominid known as "Lucy" was discovered by Dr. Donald Johanson and his team in 1974 at the site of Hadar in Ethiopia, the find sparked major media coverage across the globe. After years of research, Johanson announced his analysis of the new species, Australopithecus afarensis, which drew worldwide attention, criticism and further research from other scientists--a process of ongoing discovery that continues to redefine the human evolutionary tree.

Recently, the world was introduced to another spectacular fossil: a 47-million-year-old female mammal nicknamed "Ida," described in scientific circles by Dr. Jørn H. Hurum and his colleagues and popularized through a world-wide media blitz. Christened Darwinius masillae, Ida has been hailed by all as one of the very best and most completely preserved fossils from our human heritage. Is she THE Missing Link? Some say yes; some say no. But without question she is a window into our primate past when the key adaptations of opposable thumb and big toe had just evolved.

"In a way, every fossil is a missing link. Evolution doesn't produce one line. It's like a blueberry bush. There are many branches and side branches," said Dr. Robert Bakker, Curator of Paleontology at the Houston Museum of Natural Science. "I call her 'Great Auntie Ida.' She may not be our Darwinian grandmother but she was a close kin. She shows us the way we were when our Primate Order was young."

The appearance of Lucy and Ida, each in their own time, rekindled a vigorous academic debate about human origins, a debate that excites and informs the public as well.

"The key to scientific progress, and to successfully teaching science in the classroom as well, is exactly the kind of lively, object-based dialogue that engenders a passionate--and hopefully thoughtful--exchange of ideas," says Joel A. Bartsch, President of the Houston Museum of Natural Science. "If everyone in the scientific community agreed on absolutely everything, we would never have any scientific progress at all. We tried that once already; we call it the 'Dark Ages.'"

Starting June 24, people will be able to see firsthand the sources of this spirited debate when original specimens of the world's most famous fossils Lucy and Ida (Plate B) go on public display together in Lucy's Legacy: The Hidden Treasures of Ethiopia at Discovery Times Square Exposition™, a new exhibition facility located in the former printing presses building of The New York Times at 226 West 44th Street, New York City.

Click here to see a video of Dr. Bakker's analysis of the Ida fossil (Plate B).

Ida (Plate B)
Two separate plates of rock comprise the original Ida fossil. One plate is the layer of sediments upon which the animal lay in death, and the other is the layer of sediments that buried her remains, entombing her during the process of fossilization. Upon her discovery in the early 1980s these rock layers split apart, with a portion of the Ida fossil on the upper plate and the remainder of the specimen on the lower plate.

The original fossil Ida (Plate B) will be on public display for the first time in the Lucy's Legacy exhibition. The original fossil Ida (Plate A) is currently on view in Norway at the Zoological Museum at the University of Oslo. Surprisingly, the Plate B fossil had been published and discussed within the scientific community almost a decade before the existence of Plate A was ever announced. Because of the brittle and fragile nature of the rock, both Plate A and Plate B were imbedded in a polyester resin matrix shortly after discovery to preserve the fossil.

As reported in the scientific paper recently released by Hurum and his colleagues, some parts of Ida, particularly the hands, feet and tail, are represented only in Plate A, Plate B is valuable and unique because it shows stomach contents--one of the very few primate fossils that gives us clear evidence of what our ancient relatives ate. Plate B also has exquisitely preserved sectors of teeth and jaws.

The Plate B slab has been restored with great accuracy from Plate A, allowing visitors to the exhibition to see the details of the fingers and toes which let Ida run with acrobatic skill through the Eocene forests.

Lucy's Legacy: The Hidden Treasures of Ethiopia is an international exhibition organized by the Houston Museum of Natural Science in collaboration with the Ministry of Culture and Tourism of the Federal Democratic Republic of Ethiopia and the Ethiopian Exhibition Coordinating Committee. It is nationally underwritten by the Smith Foundation and Ethiopian Airlines.

Tickets for the special exhibition are now on sale. To purchase tickets, or for more information, visit http://lucyexhibition.hmns.org or call 866.987.9692.

The Houston Museum of Natural Science--one of the nation's most heavily attended museums--is a centerpiece of the Houston Museum District. With four floors of permanent exhibit halls, and the Wortham IMAX® Theatre, Cockrell Butterfly Center, Burke Baker Planetarium and George Observatory and as host to world-class and ever-changing touring exhibitions, the Museum has something to delight every age group. With such diverse and extraordinary offerings, a trip to the Houston Museum of Natural Science, located at One Hermann Circle Drive in the heart of the Museum District, is always an adventure.

Recreation of what Ida would have looked like in life, by Paleoartist Viktor Deak.