'How God Became King' New Book By N. T. Wright Restores the Meaning of the Scripture

How God Became King is Wright’s powerful re-reading of the Gospels that re-aligns the focus of common spiritual beliefs, which have for too long been focused on the afterlife. Instead, the forgotten story of the Gospels reveals that the real charge is to sustain and cooperate with God's kingdom here and now. Echoing the triumphs of Simply Christian and The Meaning of Jesus, Wright’s How God Became King is required reading for any Christian searching to understand their mission in the world today. 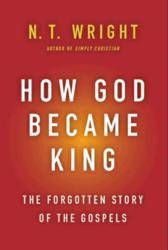 How God Became King: The Forgotten Story of the Gospels

The church has gotten the Gospels wrong, asserts Wright, by distracting people from their true meaning of transforming this world versus being about how to get to the next world—i.e., heaven.

In his newest book, How God Became King: The Forgotten Story of the Gospels (HarperOne; March 2012; Hardcover; $25.99), award-winning New Testament scholar and Anglican bishop N.T. Wright reveals that he has discovered a curious thing. After many years of leading and teaching Christian communities, he claims that people have forgotten what the four gospels are about: the story of how God in and through Jesus became the king of all the world. As such, Wright argues a major rethink about the canonical gospels—Matthew, Mark, Luke, and John—is needed:

THE CHURCH: The church has gotten the Gospels wrong, asserts Wright, by distracting people from their true meaning of transforming this world versus being about how to get to the next world—i.e., heaven. The church and its clergy need to let the gospels speak their message afresh. Yes, the message is more radical and confrontive than we are comfortable with, but that is the way of the gospel.

READING THE BIBLE: The gospels are page-turners just as much as great novels. A fresh reading of the gospels which considers what they are trying to say, how best to understand them together and individually, and how to live and work in accordance with them, results in a new vision for God’s mission in the world in and through Jesus and his followers. With this in mind, there is new life in the Christian tradition and more vibrancy in the faith.

PRAYER: Wright also suggests new ways of praying the gospels. Wright urges believers to be innovative by entering into the story of the gospels as an extra guest at the supper table, or walking with Jesus. Inhabit the story long enough to hear what Jesus has to say to individuals, so that instead of remaining mere information, the gospels become a new reality.

LIFE ON EARTH AS IT IS IN HEAVEN: Currently, the church is preoccupied with the afterlife –who is going to heaven and who will be left out. A new paradigm for the gospels positions the earthly life as under the reign of an active and caring God who wants his kingdom made incarnate in this world by the church. In other words, the way is paved for renewed efforts in mission and unity, and for believers to grow closer together in life, faith and hope.

The way in which Wright reconceives the gospels will receive a nod of recognition with Christians of many traditions, and How God Became King will revolutionize how we read the Gospels and how the church understands its role in the world. The gospels have been misunderstood for too long, says N.T Wright, and it’s time to get back on track.

N.T. WRIGHT is the former Bishop of Durham in the Church of England and one of the world’s leading Bible scholars. He is now serving as the Chair of New Testament and Early Christianity at University of St. Andrews’s School of Divinity. For twenty years he taught New Testament studies at Cambridge, McGill and Oxford Universities, and he has been featured on ABC News, Dateline, The Colbert Report, and Fresh Air. Wright is the award-winning author of After You Believe, Surprised by Hope, Simply Christian, The Challenge of Jesus, The Meaning of Jesus (co-authored with Marcus Borg), as well as the much heralded series Christian Origins and the Question of God.

“In How God Became King Tom Wright correctly points out that we often read the beginning (incarnation) and the end (cross) of the Gospels without the large middle where the message of the kingdom rings loud and clear. Wright insists that we should never separate the message of the cross and the kingdom, the spiritual from the political. The two are interwoven and the message of the gospel is weakened if we focus on only one. I recommend this book to everyone who wants to understand the Gospels’ message in a way that will not only inform the intellect but also transform life.”
— Tremper Longman III, Robert H. Gundry Professor of Biblical Studies, Westmont College

“One quiet step for the world but one courageous step for the church. That’s what How God Became King can be today. Tom Wright continues to urge and prod and propose how the church can regain a kingdom footing and end its empire heritage. And, he shows us how we can reshape both what we think about Jesus and how we follow him in our world. We need kingdom proposals not only for the church, but for the world -- and when the church starts to look more like kingdom the world will begin to hear its quiet steps.”
— Scot McKnight, Karl A. Olsson Professor in Religious Studies, North Park University