LaTienda.com, a retailer of gourmet food from Spain and Latin America, is now offering huitlacoche, a rare delicacy in Mexico since Aztec times. 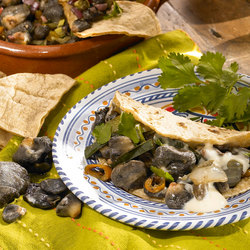 LaTienda.com, retailer of gourmet food from Spain and Latin America, is now offering huitlacoche, a rare delicacy in Mexico since Aztec times. This relative of the mushroom grows on corn kernels and is highly prized in Mexican cuisine.

Huitlacoche has a smoky sweet flavor enjoyed in soups, tacos, quesadillas and salsas. It is blue-black and is excellent prepared with seafood. "This is a special food that has been enjoyed in Mexico for a thousand years," said La Tienda owner Tim Harris. La Tienda offers uncooked, frozen huitlacoche, the best way to enjoy it outside of Mexico.

Huitlacoche was an important food for Native American cultures. It was a symbol for the generation of life to the Zuni. The Aztecs believed it possessed mystical powers and even considered it a potent aphrodisiac. It was known as nanha to the Hopi, and wesa by the Cochiti. Other names include cuitlacoche, corn smut, maize mushroom, maizteca mushroom and Mexican truffle. Huitlacoche, the Nahuatl (Aztec) word for this edible fungus, could not be cultivated until relatively recently.

La Tienda sources this artisan product from probably the only huitlacoche farmer in the U.S. The crop is grown in small batches by inoculating ears of corn just as they are forming on the stalk. Once the huitlacoche is fully grown, it is harvested, sealed in plastic and frozen for freshness.

Ironically, huitlacoche is seen as a crop blight in the U.S., and is almost impossible to find in stores north of the border. But a growing Latin American population, and an increased interest in authentic regional cuisine, is responsible for introducing special foods like huitlacoche to the U.S. culinary vocabulary.

La Tienda offers 1 pound of frozen huitlacoche for $25 at http://www.LaTienda.com.

About La Tienda:
Founded in 1996, LaTienda.com is the leading online retailer of gourmet food from Spain and Latin America, offering over 800 products. Family–owned and managed, the business is dedicated to working with artisan and small family businesses in Spain.

LaTienda.com is headquartered in Williamsburg, Virginia, with its Spanish operation based outside of San Sebastian, Spain. Warehouses in Virginia and Alicante, Spain, ship throughout the United States, Puerto Rico, Canada, Europe and the UK. LaTienda.com shipped to over 75,000 customers in 2009, including restaurants and renowned chefs. Its first retail store opened in Williamsburg, VA in November of 2009.