HUMAN Healthy Vending launches world’s first line of vending machines to vend healthful hot foods, cold drinks and snacks simultaneously from the same machine. These innovative machines will make convenient access to nutritious foods including entire entrees, a reality for busy workers and residents in communities with limited access to healthy foods. HUMAN Healthy Vending’s co-founders are on a mission to ensure that people have access to healthy foods everywhere, particularly in food deserts. 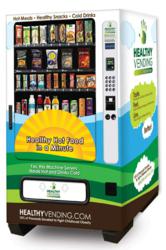 The Hot HUMAN Plus serves meals hot and drinks cold, providing a new level of convenient access to healthful food.

The thing that excites me most about this revolutionary new machine is our ability to effect massive change in our country’s food deserts where healthy food is needed most.

Because HUMAN Healthy Vending co-founders Sean Kelly and Andy Mackensen know that there is a link between low access to nutritious foods and childhood obesity, they are on a mission to place these machines in areas where people need access to healthful meals the most, including in areas designated as food deserts.

According to Michelle Obama’s Let’s Move campaign, there are 23.5 million Americans – including 6.5 million children – who live in rural and urban areas across the country who lack access to convenient and affordable nutritious foods known as “food deserts.” In its most basic use, the term refers to an area where people have limited access to healthful food – the nearest grocery store may be a mile away – and limited means to purchase healthful foods. These areas tend to be low-income, have low business opportunity, and typically have a high-density per capita of fast food restaurants. These areas have been found to have higher rates of childhood obesity and cancer than areas that have convenient access to healthful foods.

The “Hot HUMAN” line of hot food vending machines has been in development for over three years, so we’re ecstatic to finally be launching it,” stated Andy Mackensen, co-founder of HUMAN Healthy Vending. “The thing that excites me most about this revolutionary new machine is our ability to effect massive change in our country’s food deserts where healthy food is needed most.”

It’s not just food deserts, however, that need access to more nutritious foods. Even in bustling urban centers, one is likely to find that office workers – who work long hours and often do not have the time or means to purchase a healthful meal – are eating junk food from vending machines. A recent Gallup Poll found that 86% of US workers are overweight, obese or suffering from a chronic health condition.