Ian Halperin's latest film 'His Highness Hollywood' infiltrates the world of Hollywood and The Church of Scientology by having Halperin pose undercover as a gay actor. 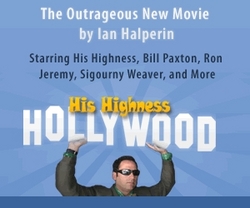 It is the way of the future, with today's Internet there is no need to have to spend millions on a major theatrical release. You can do it all online -- just like the rock group Radiohead did with their last album. The key is to get your film out to as big an audience as possible.

New York Times bestselling author and award winning filmmaker Ian Halperin is proud to release his newest film, His Highness Hollywood, onto DVD. In his latest 'outing,' Halperin poses as a gay actor to infiltrate The Church of Scientology and the world of Hollywood.

The film is based on Halperin's bestselling book 'Hollywood Undercover' (Random House). In this compelling, hilarious and controversial look behind the scenes of Hollywood, Halperin spends months going undercover as a gay actor. The film received a lot of publicity recently when at the NY premiere in front of hundreds of people someone sabotaged the film projector because they did not want the film to be shown. 'His Highness Hollywood' features appearances by numerous well known celebrities, including Bill Paxton, Sigourney Weaver, Catherine Zeta Jones, Janice Dickinson, Jay Leno, Marla Maples, Melissa Rivers, Gary Lockwood, Ron Jeremy, Joe Franklin, Brad Pitt and Vincent Chase. Halperin's undercover stint with the Church of Scientology also recently made world headlines as he became the first person on record to film what actually goes on in Scientology.

In the film, Halperin, who is known for his past undercover exposes, infiltrates casting rooms and befriends several A-list actors and industry people by posing as a gay actor who's a member of the so-called 'Israeli Royal Family.' He then ends up in a top Hollywood acting school, gets put into shape by Usher's personal trainer and is cast for several major film roles, all while infiltrating The Church of Scientology. Then the Church of Scientology offers him a "cure" for his homosexuality. Inside the Church, Halperin meets several celebrities who joined Scientology who give him the scoop on the gay rumors surrounding several of the Church's high profile members, including John Travolta and Tom Cruise. One longtime Scientologist tells Halperin who Travolta's longtime ex male lover was and how Scientology pressured Travolta to marry actress Kelly Preston and turn straight. "If you don't give up being gay the Church threatens to publicly reveal your most intimate secrets that they have recorded during their process of auditing," one notorious member of Scientology told Halperin.

To order a copy, go to SuperDupa!!, or Amazon.com. The movie has already received major studios bids, but Halperin has decided to release the film straight to DVD instead.

According to Halperin, "It is the way of the future, with today's Internet there is no need to have to spend millions on a major theatrical release. You can do it all online -- just like the rock group Radiohead did with their last album. The key is to get your film out to as big an audience as possible."

Here are some reviews for 'His Highness Hollywood':

"Much Like Borat...But with Substance."
-- NY Times No.1 Bestselling author Andrew Morton

"Halperin posed as a gay man wishing to be cured by Scientology...he received the most offensive response imaginable."
-- Ben Widdicombe, NY Daily News

"After claiming to be a gay actor afraid that revelations of his homosexuality would ruin his career, the Church took him in, promising they could 'cure him of his sexuality through auditing,'or, you know, asking him to pay up."
-- Gawker.com, NY

For more information, go to the Official Movie Website. For interview requests with Mr. Halperin please call: 646-861-0313 or e-mail at ianhalperin@hotmail.com.